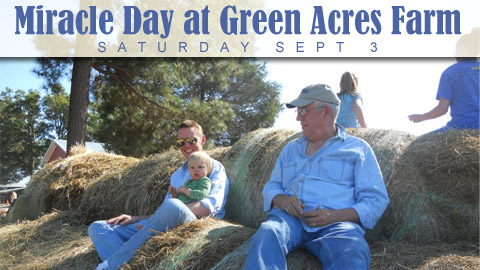 Cary, NC – On Saturday, September 3, children with disabilities will take a break from life in the city while participating in a special Miracle Day at Green Acres Farm in Cary.  Players and families of the Miracle League of the Triangle will receive free admission to the farm and corn maze. More than 200 families have registered to attend.

Green Acres is a family-owned farm, which is open to the public during the fall and winter seasons.  The farm opens for the fall on September 3 and features family activities such as a corn maze, bounce house, hay rides, pony rides, face painting, and more.  Admission prices and information can be found at www.greenacrescary.com.

The Miracle League of the Triangle is a nonprofit baseball league for children with special needs.  Serving more than 400 children with disabilities per year, the league operates 22 teams in the spring and fall seasons on an adapted, rubberized field in Cary.  Fall season begins September 9, and the league celebrates its fifth anniversary on September 17.  For more information, go to www.miracleleagueofthetriangle.com.

Players and families of the Miracle League of the Triangle will receive free admission to the farm and corn maze.  The farm is open to the general public from September 3 through October 30.

Saturday, September 3, from morning until dark