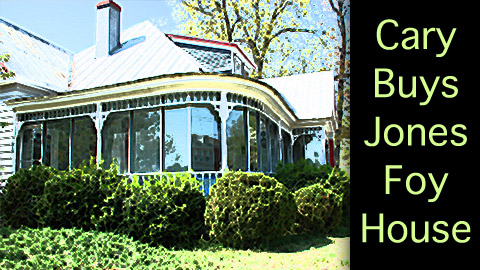 Cary, NC – More dramatic news about the quickening pace of re-development downtown was revealed this morning at the Heart of Cary Association monthly meeting.

Downtown Development Manager Ed Gawf gave an update of Town of Cary’s progress. He announced that the Town will close shortly on their purchase of the Jones Foy House at the corner of Dry Avenue and South Academy Street. Residents may remember this currently grey house as going through a series of owners and most recently sporting “For Rent” and “For Sale” signs.

Neither the purchase price nor the intended use were discussed at the HoCA meeting.

In other Downtown news, Ed told the group that the recently purchased theater (and former auto parts store) has contracted with architecture firm Quinn Evans from the D.C. area. This group was one of 15 who applied to work on the renovation, and one of four that made the short list.

Quinn Evans has worked on prestigious projects including the Kennedy Center in Washington and many other theaters and public buildings.

The theater renovation will also include updates on the entire block from Kitchen & Bath Galleries all the way to Chatham Street Cafe along East Chatham Street. Improvements will include public parking, new curb and gutters, new sidewalks and trees where appropriate.

Ed affirms the theater will be open by December 2012, an admittedly ambitious construction schedule. The name on the new marquee will be “The Cary”.

If you have an interest in what is happening in the Downtown Cary area, attend the monthly meetings of the Heart of Cary Association, the first Thursday of each month at the Cary Chamber of Commerce, 8-9 AM.

Better yet, join the group, it’s the place to be.