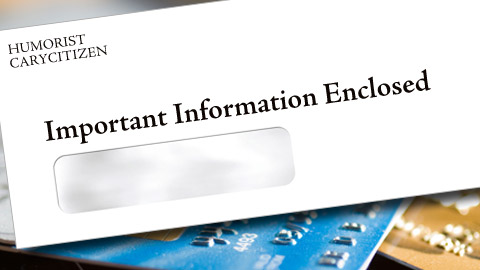 Cris Cohen is CaryCitizen’s resident Humorist. This is an excerpt from his new book, Staying Crazy To Keep From Going Insane.

The other day I got an offer from a credit card company. Credit card companies regularly offer people cards to use in the hopes that, when it comes to financial issues, you’ll have the brains of a salad bar. After all, if you are good with your money and make all of your credit card payments on time, they only make a small profit. However, if you are bad with your money and miss some payments, they can legally sell your family.

These credit card offers often come with large credit lines, ones big enough that, in an emergency, you could purchase Jamaica. This is based on the theory that, if you are given a huge amount of credit, there is a good chance that you will buy something that you will never be able to pay off at once, such as a new refrigerator or a stealth fighter. In fact, the credit card companies are hoping that not only will you not pay it off at once, but that you will not be able to cover the cost in less than 900 installments.

This is entirely possible. It is not uncommon for some people to buy things without keeping track of how much they’ve spent. Credit card companies love those people. They name entire buildings after them. If you are the type of person who charges a new Porsche to your credit card and then realizes that your annual income isn’t enough to cover the floormats, then you have a good chance of being named “Customer of the Year.”

In an effort to get as many of those types of customers as possible, the credit card companies send offers to every living human being and even to some of the more advanced members of the animal kingdom. Thus, there is a good chance that, although you have been a loyal customer, you might have a smaller credit line than your neighbors’ poodle.

This kind of bulk mailing is referred to by the credit card people as an “exclusive offer.” By “exclusive” they mean that they are limiting it to anyone who has not been dead for more than six years. After all, even after someone has passed on, credit card companies will keep sending him offers. They apparently believe that, just because someone is no longer with us on Earth, it does not mean he won’t show up at the next 18-hour sale. In fact, if you have ever been in a mall during the holidays, odds are you’ve seen more than a few people who are no longer one of the living.

Credit card offers used to come in envelopes with the company’s name on them. However, this made them targets of theft. So now the envelopes are “incognito,” meaning “with marinara sauce.”

The envelopes the offers come in nowadays are plain white and don’t say who sent them. It is a marketing technique used mainly by terrorists. However, the envelopes do have several heartwarming statements on them, things like “Dated Material” and “Open Immediately,” statements that suggest that there might be some sort of living organism inside the envelope.

Better yet, save the important line for explanations as to why your uncle is still receiving credit card offers, despite the fact that he died in 1922.

Cris Cohen’s new book, “Staying Crazy To Keep From Going Insane”, is now available on CreateSpace and Amazon. Proceeds from the sale of the book will be donated to the Miracle League of the Triangle, a local baseball league for kids with special needs. Cris’ son, Max, is one of the players in the Miracle League.