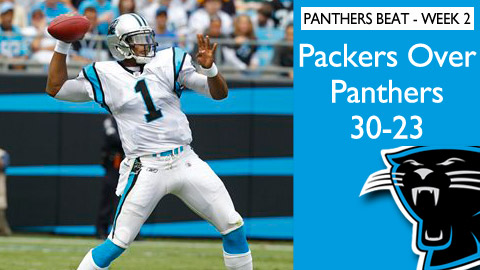 Cary-lina, NC – My Cam Newton “bromance” continues.  At least for one more Sunday. The big leagues are clearly not too big for this guy.

I watched the first quarter of the Panthers-Packers contest and I thought two things.

First, that maybe I was about to witness the biggest upset I ever saw. Second, that this was the most poised rookie QB I ever saw.

The “biggest upset” didn’t happen. But it was close, as the Panthers were once again this week in a position in the end of the game to win – this time against the world champion Green Bay Packers.

“The most poised rookie QB I ever saw”, at least in the first quarter was a valid observation. In the second half of the game, the coaching staff unfairly asked a still-wet-behind-the-ears QB to carry the team on his back.

Again, Newton threw for over 400 yards, and is on pace for an unreal 6,000+ yard season. With 37 seconds left he ran one in for a TD to bring Carolina within 7, but the Panthers were not able to convert an on-side kick.

Newton passed for 422 yards last week, and now has 854 yards passing in his first two games. He is the owner of another league record for a rookie QB – the only rookie to throw 400+ yards in back to back games.

Oh, and by the way, his 432 yards today broke the record for most passing yards in a game by a rookie,  which was held by Matt Stafford.

But one more. Get this. Mind blowing. I was watching the San Diego – New England game this weekend after the Panthers game ended. One of the announcers of that game was saying how rare it is to see a QB having back-to-back 400 yard games. Only SIX had done it they said. In NFL history. They were talking about Tom Brady.  As I was watching, I thought, wait a second – Newton just did that.

In only his second game, Newton shares that record with SIX other players. All players. Not just rookies. To put it in perspective, Packers veteran QB phenom Aaron Rogers has only thrown one 400 yard game, in his career.

Newton completed a more than respectable 28 of 46 passes. He also threw 3 interceptions. The coaching staff can’t continue to put the fate of the team entirely in this new QB’s hands.

There is no running game to speak of.

Here’s bad news –  he was the game’s leading rusher (53 yards). That will not do. That has never worked in this league.

He also got sacked 4 times.

He’s getting hit too much.

Get the ball to Williams and Stewart more. And run block.

In life, as in a football game, the principle to follow is: hit the line hard.  – Theodore Roosevelt