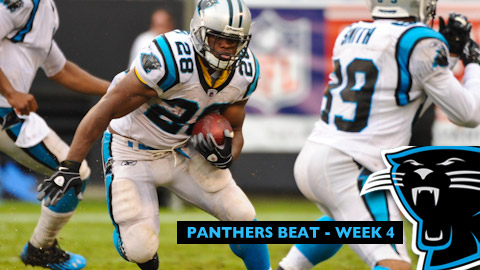 Cary-lina, NC – The 1-3 Panthers played well this week but came up short 29 – 34 to the Chicago Bears, who are not exactly the Monsters of the Midway anymore. But let’s not forget that the Bears were in the NFC Championship just a little over 9 months ago. And one of the other two losses Carolina has been handed was to last year’s Super Bowl winners.

No, the schedule gods have not been fair to the Panthers. Before the bye, they still will have to play the Saints, the Falcons, the Redskins and the Vikings. A brutal schedule. Yet they’ve been “in” every game right to the end.

Sunday I was in the self-check line at the Harris Teeter holding a 12-pack, letting people ahead of me as I awaited the North Carolina legal beer time to start. Yeah, I was “that guy”.

I received “I’ve been there” winks from some and I smiled back at them. I think I was glared at by one old lady. Don’t judge me.

Noon came. I moved up to the register. The Harris Teeter self-check attendant bypassed age verification on me, which always mildly annoys me. And then said “See ya next Sunday Mr.Young” as a walked by. Wise guy.

All good. Soon it will be me and my couch and my big TV and a dozen or more NFL games.

Parity in the NFL

It was a crazy Sunday, with the so-called “Dream Team Eagles” losing for the second week in a row to the once-lowly Niners; the Texans beating the once-mighty Steelers; the Cowboys losing to the previously-cowardly Lions; and the hapless Chiefs topping the Vikings.

This Sunday also had last year’s “worst team”  hanging around at the end to nearly pull out a win against last years’ second best team in the NFC.

There is a changing of the guard afoot in the NFL folks.

The first quarter had the Panthers scoring first on a Mare 29 yard field goal. The Bears answered back with a FG and an interception of Newton that resulted in a TD by Bears’ CB D.J. Moore.

Chicago got 14 in the second quarter and Carolina got 17. The third quarter was scoreless.

I’m still miffed that Panthers’ TE Jeremy Shockey was erroneously called for offensive pass interference (MY unbiased opinion) in the third quarter. It erased his TD catch that would have put the Panthers ahead on the scoreboard. This could have been the winning TD for Carolina.

The Bears had a huge day on the ground with 224 yards rushing, the most they’ve had in over two decades. Panthers’ QB Cam Newton had another big day with 374 yards in the air, while Bears’ QB Jay Cutler had a measly 102. Carolina’s WR Steve Smith was a big part Carolina’s success in the air, accounting for 181 yards on 8 catches.

Soon this team will be putting it all together. And while this schedule is a tough one, there are very few standout great teams in the NFL right now (Green Bay? New England?).

These new-look Panthers will one day benefit from enduring this challenging schedule. That which doesn’t kill you…

“I wouldn’t set out to hurt anybody deliberately, unless it was important, like a league game or something.”
–Ex-Bears Defensive Legend Dick Butkus