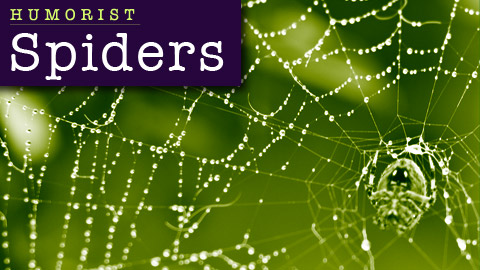 Editor’s Note: Autumn is the season for spiders, and we asked CaryCitizen Humorist Cris Cohen to spin us a tale of the humble arachnid. Photo by Greg Jordan.

Cary, NC – Spiders are part of the specialized category “Scary creatures that you can kill with a shoe”.

Most things fit only one of those descriptions. For instance, a fly can be snuffed out with a sneaker, but it is unlikely to be the subject of a Stephen King novel. On the other hand, a rabid pit bull would terrify most people, but you’re not likely to defeat it using only a suede loafer.

Spiders are classified as arthropods, which I believe is the smallest container that you can rent from the U-Haul company. They differ from insects in that they do not have antennae or any other means of getting basic cable. Mainly, though, spiders are known for having eight legs, which contribute to their scary appearance and explains why most don’t wear pants.

The natural habitat for the spider is the garage or occasionally a car port. Sometimes they are also found in forests and jungles, but that is only when they cannot locate a parking structure. Scientists have yet to explain why spiders are drawn to automobiles, especially since none are licensed to drive. It seems the spiders just sit, eat, and watch the cars. In this way, they are only a few alcoholic beverages away from being a NASCAR fan.

Many people are fascinated by the intricate webs that spiders can create. Their wonderful patterns show an eye for design that is usually only seen among people involved in experimental drug use. In fact, some people have even questioned the spiders’ source of inspiration for these elaborate creations. However, it is believed that spiders only ingest herbs for medical purposes, taking them to help alleviate their anxiety in social situations.

The silk that the spiders make the webs with is also very interesting. For one thing, some of it is made here in America. That is becoming a rare description, currently limited to reality television shows and extensive cases of diabetes.

Spider silk can be strong enough to subdue large insects or even small birds, yet surprisingly it is not machine washable. This could be one reasons why spider webs have yet to be picked up by any of the major retailers. While people appreciate that they are all natural, few are willing to pay for the dry cleaning costs.

That is all for this week’s look at the natural world. Join us next week for “Zebras: Nature’s bar codes.”