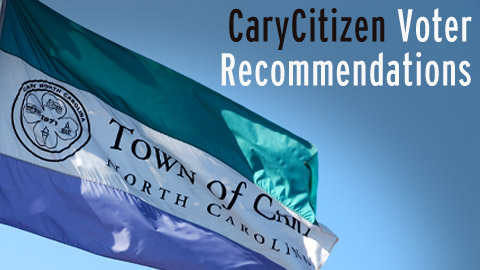 An editorial opinion by the Publisher of CaryCitizen.

Cary, NC – Many readers have been asking about our endorsements in the coming election. Without further delay, here are our voter recommendations.

Here are our 2011 Voter Recommendations for Cary:

CaryCitizen recommends you get out and vote
on Tuesday, October 11, 2011.

It may not seem like much of a recommendation, but only 10% of registered voters in Cary exercised their citizenship privileges in the last municipal election.

In fact, the composition of the Town Council probably has more direct and everyday influence on your life than national elections. Roads, schools, water, sanitation and safety are all local government functions.

In this election, the Mayor and three Town Council seats are on the ballot.

With so few votes in municipal elections, your votes counts a lot. Be a king-maker!

Do It For The Kids

Until the United States came along, people did not vote for their leaders.

Democracy had its birth in ancient Greece but was a miserable failure. European countries had Parliaments, but they were engaged in a desperate struggle with kings.

For more than 200 years, Americans have had the right to vote for their elected leaders, from lowest to highest. It has not been a smooth path to the elections of today, but freedom is not achieved in a generation.

Show your children you value American democracy and pass along to them the privilege, responsibility and joy of Election Day.

Find your polling place online if you’re not sure where to go.

Review where the candidates stand in our Cary Candidates series.

Friend Cary Votes 2011 on Facebook. Pass it along to your friends. 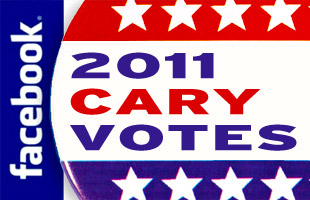