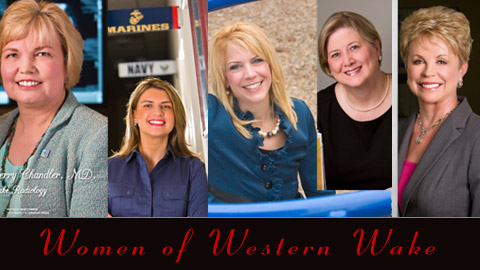 Cary, NC-  This Friday, October 14, our friends at Cary Magazine will honor 5 women for their outstanding service to our community at a luncheon at the Umstead Hotel. I asked Tara Croft of S & A Cherokee (who own Cary Magazine) to tell me about these annual honors.

Cary Magazine began The Women of Western Wake series in 2005 and held the first luncheon in 2008. The editor at the time realized that the area has a lot of powerful, influential women and decided to recognize them as a group once a year in The Women’s Issue. The luncheon was first organized to bring the honorees together and engage readers and other businesswomen with a live event to hear their perspectives in person. This year’s 5 women brings the total honorees to 33.

I asked Tara what made this year’s women stand out and she responded:

They’re steadfast in standing up for their causes, and they don’t bend. That’s not without controversy for some of them, but it’s a price they choose to pay to do what they believe is right.

Dr. Kerry Chandler, director of breast imaging services at Wake Radiology: She worked her way through med school with a young child, and is now devoted to making sure as many women as possible get their yearly screening mammograms to save lives. She is incredibly driven toward that pursuit.

Phyllis Eller-Moffett, CEO of Quality Staffing Specialists: Originally wanted to settle into an industry with staying power, and chose staffing. After working for another company for years, she moved to North Carolina and started QSS from scratch. It’s now a notable company with hundreds of temporary worker placements every day, and she has won a laundry list of awards for her accomplishments.

Debra Goldman, Wake County Board of Education: She’s been a public servant before, as a volunteer firefighter for seven years. When she was in a car accident, she decided she wanted to help others. Now she resolves to help children get the opportunities they need to excel.

Monica Smiley, editor and publisher of Enterprising Women magazine: After working in publishing, Smiley decided she wanted to find the thing that really fed her soul, and established Enterprising Women magazine. Today she’s a thought leader in women’s entrepreneurship and has represented her magazine all around the world at international conferences of women entrepreneurs.

There are women whose names everyone in Cary knows, like Sheila Ogle, Daphne Ashworth and Ann Goodnight. Some honorees have founded companies from the ground up, and others who are public servants. A full list of past winners  can be found here.

Although Cary Magazine does get suggestions throughout the year for nominees, it’s not officially a nomination-based honor. The editors take note whenever they see a woman who is a president, CEO or founder of a company that’s making the news. They look for women who aren’t afraid to challenge others in positions of power but also those who succeed as wives, mothers, sisters and friends while managing, leading and inspiring others.

When selection time comes around each year, they consider the full picture of all the women they’ve been noting. They select the most inspirational, or those who have made the biggest waves in the past year and in their overall career history. It’s never an easy decision, simply because Western Wake has so many astounding females.

Bianca Strzalkowski from this year’s ladies may very well be  the youngest. She’s 31 and has already made a name for herself as a national figure representing military spouses and families around the world.

At last year’s Luncheon Cynthia Marshall shared a poem, Be the Best of Whatever You Are which sums up the qualities sought out in this award. http://www.great-inspirational-quotes.com/be-the-best-of-whatever-you-are.html

The award represents women who are the best. They might be the best in very different ways or at radically different things, but in some way, they are at the top.

The Umstead Hotel & Spa in Cary.

Tickets for this event are $40 per person.

This event, Sponsored by Crescent State Bank, and will feature a panel discussion with the 2011 honorees.