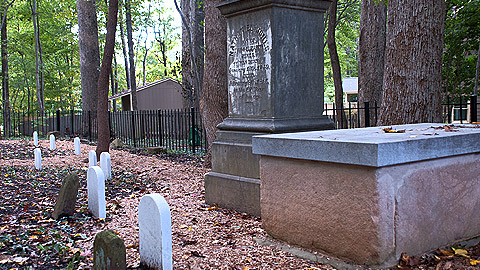 Cary, N C- Tucked away at the end of a cul de sac in a modern day neighborhood stands White Plains Cemetery.  Within it are the grave sites of some of Cary’s earliest residents, Nathaniel Jones (1749 – 1815), his second wife and at least  nine other descendents. Saturday, restoration of the graveyard complete, The Friends of Page-Walker along with the Town of Cary marked the dedication with Remembrance Day.

Tucked between 2 homes, the obelisk of Nathaniel Jones’ gravestone stands today next to the grave box of his second wife. The Friends, with help from the town, righted the towering stone, and recreated the lid of the wife’s grave that had been destroyed by vandals. Archeologists discovered 9 unmarked graves, which have been given new headstones. A wrought iron fence surrounds the cemetery and a gate welcomes visitors to come inside. An historical plaque has been installed to one side. 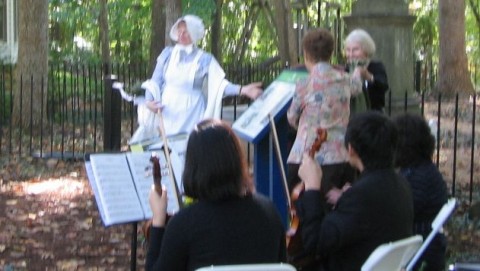 On Saturday, under a glorious sky, Ed Yerha, president of the Friends of Page-Walker, presided over an uplifting ceremony. Mayor Harold Weinbrecht gave an introduction. He was followed by three members of Page-Walker.  Peggy Van Scoyoc, attired in colonial dress, bore a sprig of cotton to symbolize the agriculture that took place here centuries ago.

Brent Miller appeared in a top hat and discussed the importance of not only the site, but the man, Nathaniel Jones himself and his place in Cary’s history. Jones owned one of the largest farms in the state, which included over 100,000 acres. He put forth with 3 others a bid for the State Capital to be located here, but as we know that went to what is now known as Raleigh.

Bob Myers spoke of Jones’ conscience which would not allow him to die and leave this earth still owning slaves. He freed them before his death.

Jones was married twice, one wife bearing 9 children, and the other 7. Many of his descendents were in the audience that day. John Brooks, an attorney for the  NC Industrial Commission, spoke about his family’s continuing legacy.

Through the Eyes of Newcomers

Irene Kittinger remarked that “sometimes it takes newcomers for us to see the importance and value of what we have taken for granted”.

She talked about how many years ago she was trying to find this cemetery in what was at that time dense woods. When she and her friend Anne Kratzer came upon it, the obelisk was leaning to one side and the cover to the grave box of the wife was broken.

Fortunately, she had the presence of mind to take a rubbing of the grave marker. Upon a later visit, it had been completely destroyed.

Saturday was a day of remembrance, and a day to remember.