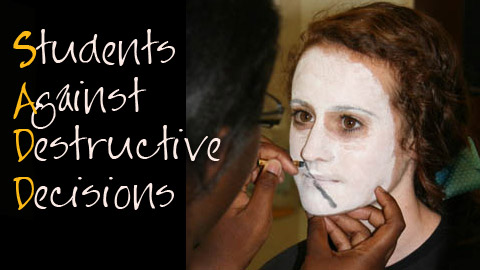 Cary, NC – The Cary Academy chapter of Students Against Destructive Decisions (SADD) participated in the organization’s Shhhhh….it’s a secret event on Oct. 20.

In Shhhhh….it’s a secret, also known as the SADD Grimm Reaper Event, CA members of SADD left class quietly at a synchronized time, had white make-up applied to them to resemble a “ghost” and a black X put on their mouths. They spent the rest of the day not speaking .

The event showed students what it might be like if they were to lose their peers, perhaps in a car or other accident due to another student’s/friend’s destructive decision.

The day ended with the “silents” and the other SADD members holding an assembly and informing the Upper School of the purpose of the event.

Weekend Events: Howlin in the Hood

Cut-A-Thon For Kay Raises Over $5000
Scroll to top