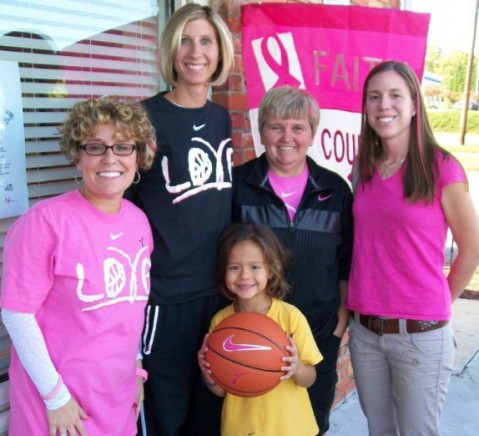 Cary, NC- A few weeks ago, we reported about a cut-a-thon that raised that helped raise money in the fight against breast cancer. October is after all, Breast Cancer Awareness month, and folks around Cary get motivated for this cause like no other.

Mitchell’s Academy, with a location on Buck Jones Road, held a 2 day cut-a-thon of their own last weekend and asked people to pay what they wished to donate for the cause while getting a haircut or a brow wax. Money raised will be donated to the Kay Yow Cancer Fund here in the Triangle.

Over the weekend the salon raised $5100 and performed over 275 services to women who came in from all over the Triangle.

What set this event apart was the involvement of past NC State Women’s Basketball team members. These athletes spoke about the connection they felt with Coach Yow, who lived in Cary and whose team was an extended family.

“We were her children”, Ashley Hancock Roman said of Coach Yow. “She knew our parents’ names, our children’s names and asked about them when we spoke. She sent us hand written birthday cards.” Roman remembered fondly that Coach Yow made time for people. People mattered.

Ashley Hancock Roman played on the NC State Women’s Basketball Team from 1988-93. She lives in Cary with her family and teaches PE at Saint Michael’s School. She says she uses some of Coach Yow’s wisdom with her children and students. A favorite Kay Yow quote of Ashley’s is “Don’t let the urgent get in the way of the important”.

Roman feels that it’s important to pass on the legacy and wisdom that Kay Yow taught her . Through raising awareness and funds for breast cancer research and finding a better quality of life for those with cancer, she hopes to do just that.