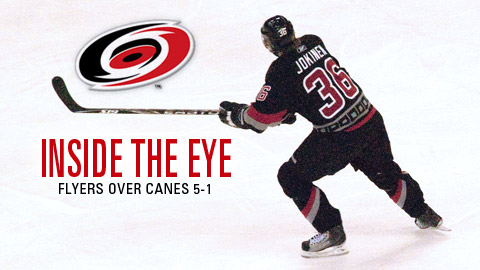 Cary-lina, NC – The Carolina Hurricanes lost to the Philadelphia Flyers, on the second part of  back-to-back weekend games.

After playing a great game 24 hours earlier, the Canes blew it in the third period giving up 4 goals, after starting the period 1-1, eventually losing by a score of 5-1.

Coach Maurice tapped former Flyer Brian Boucher to start in goal.  Professional athletes in all sports like playing against their former team for a variety of reasons.  There have been many Flyers-Canes connections over the years.

The biggest one is probably the Rod Brind’Amour (and Jean-Marc Pelletier) for Keith Primeau transaction back in 2000.  How good was that move for the Canes?

Others are Justin Williams, Sandy McCarthy,  Pavel Brendl, and a bunch of other players. Then there’s Flyers coach, Peter Laviolette, who was behind the bench when the Canes won their first Stanley Cup.

Tim Gleason had a bad turnover with an errant pass to Claude Grioux who had a quick pass to Scott Hartnell for a Flyer 1-0 lead.  The rest of the first period had lots of action at both ends of the ice with each team making good plays on both offense and defense.  On what started out as a Flyer 2-on-1, Tomas Kaberle skated back hard to make a fine play breaking up what could have been a sure goal.

For the first time in years the Canes could match, or come a lot closer, size for size.  Philly seems to consistently sign players with size and skill.  Their biggest off season signing was Jaromir Jagr. Shots after 1: 10-10

Early in the second period, on a line change for both teams, Jiri Tlusty made a pass to Jussi Jokinen in a crowd of Flyers around the net.

Somehow Jokinen found the puck in a scramble with one of the Flyers lifting the back end of the net just as he lifted a beautiful shot into the upper left corner.  After the video review, the goal stood, making it 1-1.    With Skinner drawing another holding penalty by a Flyer, the Canes power play failed to deliver and the second period ended even at 1-1. Shots after 2: Canes 18, Flyers 20

The Canes completely collapsed in the third with Jagr scoring just 39 seconds in for his 650th NHL goal that, despite a 3 year NHL absence while playing in Europe.

That was a  sign of what was to come as the Flyers dominated the Canes and put 3 more in the net before the period ended.  The Flyers are a high scoring team and had even been on the losing end of a 9-8 game 2 days earlier.

As fans, we can make excuses all day long: they had an extra day rest, that game was home and they didn’t have to travel, the Canes played the night before and had to travel, but in the end, on this night, the Flyers third period was the difference.

Good news is the Canes play them twice in the next 3 weeks and redemption is hopefully in store.  Bad news is former Whaler/Canes player, Chris Pronger may be back after being out with a severe eye injury.

Harold’s Blog: The Future of Our Parks