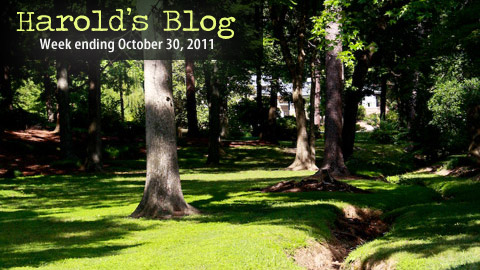 From the blog of Cary Mayor Harold Weinbrecht, covering the week through October 30, 2011. Photo of Heater Park by Zach Hayes.

Cary, NC – This week was another busy week as mayor. It included a work session on the future of parks, a taping of Cary Matters, and a short council meeting.

Monday, before regularly scheduled council meetings, I call council members to find out if they have concerns or questions that staff needs to prepare for the meeting. This week I was able to get in touch with all council members except one and there were no issues or questions expressed. Monday afternoon I met with management, administration, legal and engineering staff to go over the agenda. Staff also expressed no concerns and we all believed it would be a short meeting. My prediction was that it would be about a 45 minute meeting.

The Future of Our Parks

Tuesday I held my weekly meeting with the town manager. Most of our conversation focused on issues related to Morrisville Carpenter Road near Highway 55. Staff has been working on several options, all of which are expensive.

Tuesday night the council held a work session to review preliminary findings from consultants on the town’s Parks, Recreation and Cultural Resources Master Plan Update. This update is required for our parks department to retain accreditation.

The consultant from Colorado reported that several thousand questionnaires were mailed to Cary residents and 13% responded. This amount of response was statistically valid and gave the consultants and council an idea of the needs and desires of Cary residents.

The only big surprise was that many residents wanted unpaved trails. Over 800 emails were also received and, though not statistically valid, were in line with the valid responses.  The consultant has these findings in a database which will allow future what-if scenarios.

They will take their findings along with council comments and formulate recommendations to be presented February. At that point we will start the public hearing process.

The second work session on Tuesday night was on the council/staff retreat to be held January 13 and 14. The main discussion was whether or not to hold the retreat in town or out of town. The budget allowed for a facilitator which usually costs several thousand dollars. Instead the council will use a facilitator from the NC School of Government and go out of town to allow for team building. I believe team building is important especially if the council wants to continue to be a high performing and functioning council. The council decided to go one of the following in order of preference: Wilmington, Salisbury, or Charlotte.

Wednesday started with the November taping of Cary Matters. It was the first Cary Matters I have been a part of since I filed for re-election. The council created that rule a couple of years ago to make sure there is not an advantage of TV exposure during a political campaign via Cary Matters. Council member Robinson has been hosting the show while I was campaigning. In this show we announced that we will alternate hosting the show and have the five other council members as guests. That means that council member Robinson will write a show then I will write a show. She wrote this show which went into detail about Aquastar, the town’s automated water metering system. We also talked about recent elections and the new train depot. This show will begin airing on November 1st.

Later Wednesday I met with the 2011 campaign team one more time. This was a wrap up meeting to see what we did well and what we could improve on.

Thursday started with a meeting of the Economic Governing Board. The meeting opened with an itemized financial report of Chamber’s expenditures of the $235,000 allotment from the Town of Cary. Their audit shows them on target and under budget. Next the Chamber presented a framed award that they received on behalf of the Cary from FDI. It included top ten for economic potential, human resources, and quality of life.

The final part of the meeting focused on quarterly news and results. Here are some of the highlights:

Thursday night the council met and only had one item which was a mixed use proposal on Old Apex Road.

While no neighbors protested the use, they were concerned about flooding and runoff. Apparently, the previous property owner cleared the land and created a poorly functioning retention pond. Residents behind that property began experiencing drainage issues after that point in time. The current development will fill in the drainage pond (which is mosquito infested) and will improve the drainage situation.

After much discussion the council granted unanimous approval. The meeting lasted about an hour and forty-five minutes.

At the RBC With Centennial Authority, Then to Greenville

Friday night my wife and I joined the mayors of Wake County at a Carolina Hurricanes hockey game. We are guests twice a year of the Centennial Authority. Several of the conversations focused on current re-election efforts. I am thankful that the campaign stress is over for me.

Saturday morning my wife and I left very early to be in Greenville for the ECU homecoming parade which my daughter was participating in. We then met a few of her sorority sisters before going over to the football game. We had a good time and enjoyed seeing our daughter.

I got back in time to grab a bite to eat and shower before heading over to the Cary Band Day competitions at Cary High School. I was fortunate enough to see several good performances. This year I had the privilege to presenting the overall drum line award.

In news from staff this week it was announced that, the Town will be implementing a prescribed fire burn at the Hemlock Bluff Nature Preserve. Wildfires are a common threat in many areas of North Carolina, especially during drought and times of high winds. Prescribed burns are a proven and safe way to reduce fuel loads in forests and other areas, reducing the probability of wildfires.  Weather permitting a small prescribed burn, less than the size of a two football fields will be conducted early 2012.

SAS announced this week that it is No. 2 on the inaugural list of the World’s Best Multinational Workplaces! The rankings were just announced at an event in New York City sponsored by the Great Place to Work Institute. I am so grateful that Cary is the home of this great employer.

Emails this week included complaints about the trash collection center on North Dixon and a McDonalds in west Cary. I also received several invitations to attend and participate in various events. It looks like my schedule will stay busy for a while.

Next week will be slower, relatively speaking, with only a council work session, a ribbon cutting, and an event for the Food Allergy and Anaphylaxis Network.

Well that is all for this week. My next post will be on Sunday, November 6th. Please feel free to email me with a comment. Email all Town of Cary questions or comments to Harold.Weinbrecht@townofcary.org. Email personal comments to augustanat@mindspring.com.