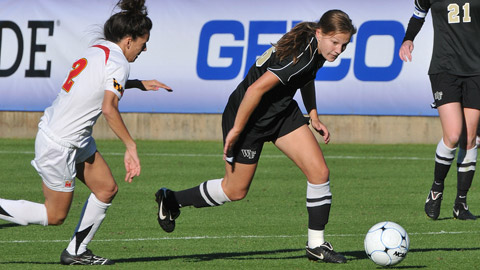 Story by Steve Phillips. File photo by Tom Mousseau from last year’s ACC Women’s Soccer Championship in Cary between Wake Forest and Maryland. The Deacs are this year’s defending champs.

Cary, NC – Women ACC play quarterfinals finished up this Sunday on college campuses, and now the semi-and final matches will move to Cary’s WakeMed Soccer Park this Friday, Nov 4.The field is set for the 2011 ACC Women’s Soccer Championship with all the familiar teams in attendance. Duke will play Wake Forest, and Virginia meets Florida State this Friday in the semi-final match ups.

Sunday’s quarterfinal action at the campus sites of the higher seeded teams found No. 1 Duke edging No. 8 Virginia Tech 1-0; No. 2 Virginia blanking No. 7 Maryland 2-0; No. 6 Florida State topping third-seeded North Carolina 1-0 in double-overtime,  and No. 5 Wake Forest defeating No. 4 Boston College 3-2.

The tournament now moves to WakeMed Soccer Park in Cary, N.C., which will be hosting the semifinals and finals for the fourth straight year and the eighth time in nine years. Friday’s first semifinal matchup finds Duke (17-2-1) facing Wake Forest (13-3-3) at 5:30 p.m. The second semifinal at 7:30 p.m. finds Virginia (14-3-2) matched against Florida State (13-6). Both games will be broadcast by ESPN3.

The winners advance to next Sunday’s 1 p.m. championship match (Nov 6), which will be broadcast nationally by ESPNU. Defending champion Wake Forest and Virginia are both going after their second ACC Championship titles, while Duke and Florida State seek to win the tournament for the first time. Duke earned the top seed for this year’s Championship by placing atop the conference standings with an 8-1-1 league record. The regular-season title was the second in Duke women’s soccer history and the Blue Devils’ first since 2004.

Duke used two second-half goals by sophomore Laura Weinberg to top Wake Forest 2-0 in the regular-season meeting between the teams on Oct. 20. Florida State and Virginia played a high-scoring shootout at Charlottesville, Va., on Oct. 8, with Caroline Miller’s goal in the 93rd minute lifting the Cavaliers to a 4-3 win.

Each of the four teams in the semifinal field boasts an impressive national ranking. Duke enters Friday’s games ranked as high as fourth nationally, Virginia as high as fifth, Wake Forest as high as seventh and Florida State as high as 12th.

The Blue Devils opened on the attack from the start as sophomore Kaitlyn Kerr had a shot blocked in the first two minutes of the match.  Following a Hokie foul at the 23-yard mark, sophomore Mollie Pathman fired a shot into the box that got knocked around.  Sophomore Laura Weinberg then  tapped it to freshman Kelly Cobb who punched it inside the left post for her team-leading 10th tally of the season.

Duke snapped a streak of five matches without scoring a first half. Cobb matched a Blue Devil freshman record with her 10 goals on the year..  With the goal at the 2:51 mark, it marked the second-fastest tally of the season and the sixth time this year Cobb has scored Duke’s first goal in a match.

Tara Campbell registered the win in goal for the Blue Devils as she played the first 30:14 of the match and finished with one save before leaving the game due to a broken nose Redshirt freshman Meghan Thomas added a career-high three saves in a career-best 54:46 minutes.

The 25th-ranked Hokies (12-7-1) tried to mount a late rally with five shots over the final 10 minutes and three corner kicks in the last three minutes. But Duke held on to post its school-record 14th shutout of the season and claim its first ACC Championship win since 2005.

The Cavaliers took the lead in 29th minute of play. Amanda Fancher’s cross fell to Molly Menchel at the top of the box, where she fired a shot into the upper left corner for her third goal of the season.

Virginia’s second goal came in the 83rd minute. Caroline Miller found Gloria Douglas on the wing, and Douglas cut inside and fired a shot just under the crossbar for her sixth goal of the season.

Virginia posted its fifth consecutive shutout, its longest streak since six straight shutouts in 2009. Chantel Jones made one save to earn her 44th career shutout, tying the NCAA record. Jones, who has 11 shutouts this season, equaled the mark set by Erin Guthrie of Rutgers (2006-09). Boston College keeper Jillian Mastoianni has 43 career shutouts, 10 of which have come this season.

Rachel Nuzzolese scored the opening goal and assisted on Wake Forest’s other two scores as the fifth-seeded Demon Deacons took their first step towards defending their ACC Championship.

Kim Marshall notched her first-career goal in the 22nd minute, when she one-timed Nuzzolese’s service into the back of the net. Riley Ridgik netted the game-winner in the 70th minute, heading Nuzzolese’s corner kick inside the far post.

Boston College (11-5-2) tried to rally late, getting a penalty kick goal from Gibby Wagner in the 71st minute and a Kristie Mewis score in the 90th minute, but could not complete the comeback.

A golden goal by Jessica Price in double overtime gave No. 12 Florida State the victory over No. 8 North Carolina.

Price found the back of the net by putting away a loose ball in the box following a Florida State corner. The game-winner was Price’s second of the season and 11th of her career, while it marked her second career golden goal.

The play was set up when Tiffany McCarty won the corner kick. Tiana Brockway took the corner and sent the ball to the far post where Ella Stephan put a header on goal.  UNC keeper Anna Sieloff was there for the initial save as she tipped the ball off the crossbar, but Price made a great read and one-timed the rebound over the goal line for the game-winner.

The shutout was FSU’s ninth of the season and third in the last four games.  FSU keeper Kelsey Wys played the entire contest and made two saves vs. the Tar Heels (11-5-1) to record her fifth shutout of the season.

Check our events Calendar regularly to find out about this and other events in Cary.

Harold’s Blog: The Future of Our Parks
Scroll to top