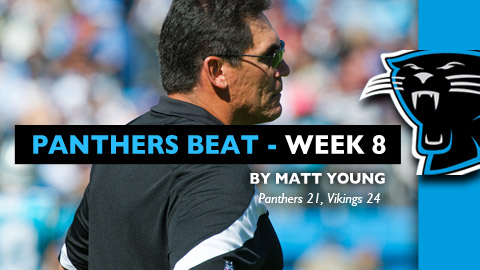 Story by Matt Young and photo by Tom Mousseau for CaryCitizen.

Cary-lina, NC – The Panthers let this one slip away from them.

Sunday’s contest was taken down to the final seconds only to have Olindo Mare miss a “sure thing” 31 yard field goal that would have sent the game into overtime with 29 ticks left.

Cam Newton still appears to be a serious candidate for Rookie of the Year with another solid performance with nearly 300 yards in the air and 3 TDs going 22 for 35.

While Newton’s three touchdown passes were a season best,  Newton fumbled twice in the first half leading to Minnesota scores.  And in the second half, the Panthers’ offense struggled at times.

Just prior to the missed Mare field goal Newton completed an amazing 44-yarder to Brandon LaFell (on fourth-and-15). Greg Olsen also had a big play with a second quarter 39 yard reception from Cam Newton.

The Cats’ run defense improved as they held Adrian Peterson to 86 yards with an average of 4.1 yards per rush.

I usually have some silly saga or previously-untold-personal-mindblowing-secret to tell you about the things that happen on game day at my house, but this weekend – I got nothin’.

BUT I DID make chili – my own recipe.

So I thought I’d share that with you. Trust me, it’s awesome.

1 to 2 pounds of ground beef – I like the lean stuff for this
1-3 jalapeños chopped – I grow ’em in my garden
1 rough chopped green pepper – ditto above
1 onion chopped
1/2 t. chopped garlic
1 can of corn, drained – or a cup of frozen corn
3 cans of beans – black beans or red kidney beans
1 teaspoon cumin – this is a must
1/2 t. dried oregano – if fresh, use 2 teaspoons
1/2 bottle of beer – I use my home brew
1/2 cup chicken broth – water will do in a pinch
2-3 12 oz. cans of diced tomatoes (or sauce or fresh chopped) – today, I used the last of my garden harvest
1 small can of tomato paste – optional
Handful of cilantro – chopped
Salt/pepper to taste

Sauté  veg in olive oil, set aside
Sauté  beef and drain
Add beef and veg to pot on low
Add spices
Add beans and corn and tomato stuff
Add all liquids
Drink the leftover beer in the bottle

Optional (but mandatory in my house):

Serve with tortilla chips for dipping, grated cheddar or jack, and sour cream.

Stay tuned next week as I will be trying to get the game on TV while I am traveling in Asia. That should be interesting.

Boys will be boys, and so will a lot of middle-aged men – Kin Hubbard