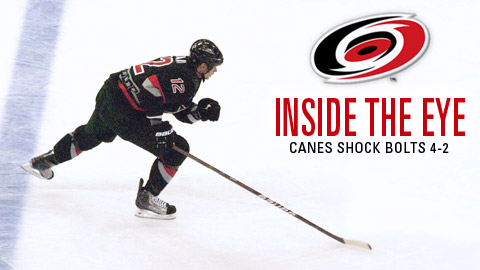 Cary-lina, NC –  Where the Hurricanes failed on opening night, they succeeded on Nov. 2 with a commanding 4-2 victory over Tampa Bay with two goals from both Jeff Skinner and Chad LaRose.

Feeling Each Other Out

The game started like 2 boxers sparring – “up and down” hockey, trading shots but no real scoring chances by either team.

Like the better boxer starting to get more aggressive, the Canes woke up and started pouring it on.  All lines started flying and shooting with the Eric Staal- Jiri Tlusty-Chad LaRose line accounting for 9 of the 19 shots in the first period.  The defensive side was also strong with one particularly good play by Jay Harrison using his long body and stick to help break up a good scoring change that started out as a 2-on-1.

The Canes had a power play where the first unit held the puck in the zone for over a minute, got some good shots but just couldn’t put the puck in the net.  As happens so often, as the penalty ended, Tampa Bay had a rush and with Marc-Andre Bergeron taking aim at the point, got off a nice shot with Teddy Purcell knocking in the rebound off the initial stick save by Cam Ward.

With a Bolt in the penalty box, the Canes’ second power play unit moved the puck well with Harrison taking a pass from Alexei Ponikarovsky, shooting on goal.  Dwayne Roloson, made a nice save but couldn’t hold the puck that settled in the crease with a very excited LaRose tapping it in to tie it up 1-1.  Shots after 1: Carolina 19  TB 7.

There were some coaching games going on to start the second period as Tampa Bay kept changing lines, countering for the desired match up.

Advantage Maurice as it started with the Skins and Finns line (Jeff Skinner-Jussi Jokinen-Tuomo Ruutu).  Jusi won the face off and the Canes methodically carried the puck into the offensive zone.   After a scrum along the boards Joni Pitkanen tapped the puck to Skinner who managed to skate through 3 defenders for an unbelievable shot to put the Canes up 2-1.

A short while later, Jussi picked up the puck after a broken stick by a Bolt defenseman at the Cane blue line.  On a text book give and go with Skinner, into Tampa Bay’s zone, Jussi made a sweet pass to Skinner who made a no-questions-asked shot.

That goal deserved an ovation, and I very well may have been the first person in the entire arena to stand and applaud.  Problem was I was in the press box. I’m new to this and the other reporters glared. Hard to resist cheering a great play. If the Lightning made the same play, I would have done the same thing. Ah well…live and learn.

On a rare call with both LaRose and Staal called for penalties on the same whistle, the Canes had to step up an already impressive PK team.  Tim Gleason, Bryan Allen and Brandon Sutter did a phenomenal job killing the 5 on 3 with the Bolts getting off just 3 shots.  Ward’s save on one shot was unbelievable.  I stayed in my seat. Shots after 2: Carolina 27, TB 17.

The start of the third period had the Bolt pressing with excellent forechecking that kept the puck in the Canes’ end for nearly 5 minutes.

Zach Boychuk made a nice tip of the puck around a defender to clear the zone and used his speed for a dash to the Lightning goal only to be brought down by a sliding defender with nearly 14,000 fans not agreeing with the silent ref whistle.

Early in the period Jussi got twisted and the official NHL wording: “Lower Body Injury”, put him out of the game with Tim Brent taking his spot.

On the first shift of that new line, defenseman Tomas Kaberle made a beautiful pass to Ruutu for a tip shot that just missed the net. Tampa’s top line of Vincent LeCavalier-Martin St Louis-Brett Connolly finally scored. By the way, Connolly was selected in the 2010 draft just ahead of Skinner and is also 19 years old. Less than a minute later, Tlusti skated down the left side, waited patiently then sent a slick pass to the stick of LaRose who double clutched and put the Canes up by 2. Final Shots: Carolina 31, TB 30.