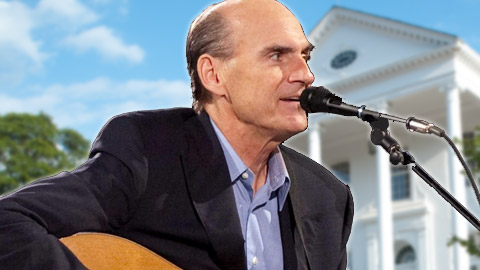 Cary, NC – Singer-Songwriter James Taylor will be coming to the Cart Arts Center (CAC) on Friday, November 18, 2011 as part of a fundraiser for Barack Obama’s reelection campaign. Tickets are $500.

The President and the Cary Arts Center

Two years ago, the Cary Arts Center was a crumbling elementary school. Now, the old-building-made-new at the south end of Academy Street is part of the world stage.

Of course, all the world’s a stage. But some stages are more worldly than others.

You know a place has arrived when it’s mentioned twice in one day in connection with the Leader of the Free World.

Just this morning, I received an email saying the Nnenna Freelon concert at CAC on November 12 was postponed due to a conflicting demand from the White House. This from Town of Cary:

After accepting an invitation from the White House to perform at the 2011 Asia Pacific Economic Cooperation Summit, Nnenna Freelon has postponed her November 12 Marvelous Music Series concert at the Cary Arts Center to January 28, 2012 at 7:30 p.m. All tickets with the original date will be honored January 28; patrons with ticketing questions, including requesting refunds, should call the Cary Arts Center Box Office at (919) 481-5190. Following her January 28 concert, Freelon will host a CD signing and autograph session open to all ticket holders. For more information, search “Marvelous Music Series” at www.townofcary.org

Back to the President and James Taylor

The President’s approval rating is less than robust. And North Carolina, and a state he won in ’08, is now a “battleground.”

James Taylor on the other hand is wildly popular, especially here, just miles from where he grew up in Chapel Hill.

Like or dislike the President, what’s amazing to me is the instant emergence of Cary Arts Center as an important venue. A piece of the world’s stage.

Expect tickets to sell out quickly.

Inside the Eye: Canes Get Redemption By Shocking the Bolts 4-2