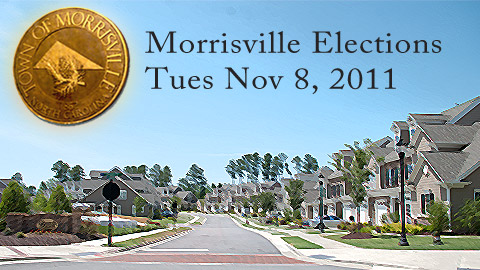 Morrisville, NC – Voting is over and done with in Cary, but many other municipalities adhere to the “first Tuesday in November” rule. Here’s a reminder and some information about Morrisville’s Election this coming Tuesday, November 8, 2011.

The election on Tuesday will decide four of the six Council Members for Morrisville, including District 1, District 3 and 2 At-Large seats.

The Town has helpfully provided a Morrisville Polling Place Map. You can also look up your info on WakeCo.Gov/Elections.

The Morrisville Chamber has produced a non-partisan guide for voters. You can see video of the debates and read more about each of the candidates.

“Your vote counts.” That’s a phrase you don’t hear uttered with any seriousness in many countries of the world.

Municipal elections in the U.S. have low voter turnout. In Morrisville, the election will be decided by only a handful of votes for some races.

Support American democracy and set a good example for the next generation of citizens. Vote in Morrisville this Tuesday, November 8, 2011.

Panthers Beat: An American in Bangalore
Scroll to top