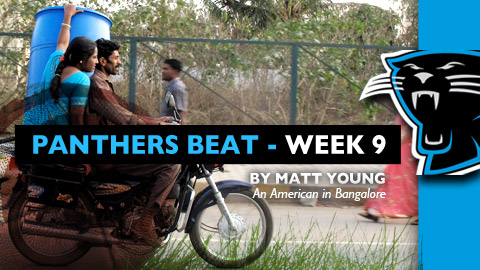 Cary-lina, NC – As you know, the Panthers had a bye this weekend. I still need to watch football on Sundays though. I am writing this from a hotel room in the wee hours of the morning while watching football on my laptop from Bangalore.  Bangalore. In India.

Sunday: The Best Day of the Week Even If It’s On Monday

The past month my travel plans to Asia/Pacific countries on business have entailed careful calculations so that I could plan my sleep breaks along the way, in hopes that I would not be useless after watching football till 6:00 AM Monday in India (I have to be “at work” Monday morning!).

A couple weeks ago one of my colleagues in India, Faraz, decided to give me a hand.

Our “IM” conversation is accurately cut/pasted (not really, but it is a reasonable facsimile) below.

I am literally scratching my head, confused. Then it hits me.

“Ohhh. No, not cricket, football.”

I now assumed the first pause was him checking to see who was playing. People from India follow cricket much more closely than soccer. And the national sport is field hockey.

“Ok – do you want me to make sure that American Football is on at your hotel? What station is it on?” This was actually typed in tentative font. I swear.

By now I assume he is wishing he had faked that he didn’t see my IM in the first place. We’ve had this technical problem with the windows not popping up prominently on our laptop screens lately. Too bad for him, things were working fine.

“Would you?”
I give him the vitals.

“Hi.Matt.”
“Hey Faraz.”
“Good news sir. I called the hotel. They get Fox Channel”. I was doing a butter-churn dance. Faraz was, I am sure, rolling his eyes and relieved to be rid of me.

I thought for a second…

“OH. It can’t be Fox NEWS. I should have said that.”
Fraz HAD to be fuming. “You darn right you should have, do you have any idea what time it is here and how tired I am?”, Faraz I am sure – said.

Of course I really have no way of knowing what he said that because we were IM’ing each other and were 8000 miles apart.

“Yo. Matt.”
“Faraz?”
“Right.I contacted the hotel and have further good news on your request. It is NOT Fox News that they have.”
“Aweome! Thanks so much!”
“So write this down, Matt. They carry Fox Travel Channel on station 37.”

“Oh no. It has to be the network station, not Fox Travel.”

I send an “LOL smiley face”. Still nothing.

It had to be that he was not seeing my IM’s anymore.

I decided to find a way to watch on my laptop.