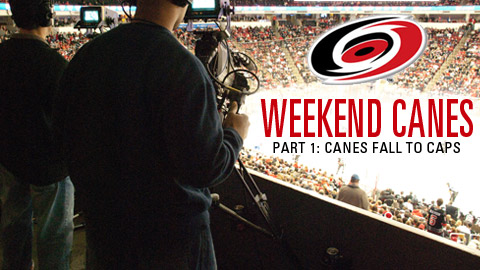 Cary-lina, NC – The Canes hosted the Southeast Division leader, the Washington Capitals, Friday Nov. 4 with all its fire power and high salaries.  Ever look into the cost of a game at the Verizon Center?  If so, you could upgrade to Club Level at the RBC Center and still buy beer for your group.  The Canes only win against the Caps last year was a shoot out win in D.C. and normally their games are close.  This one wasn’t one of them losing 5-1, ending their home win streak at 2 games.

Both teams have 2 key players out with injuries: Jussi Jokinen for the Canes and All-Star Mike Greene for the Capitals. Anthony Stewart filled in on the line with Tuomo Ruutu and Jeff Skinner.  The lines of, Eric Staal-Chad LaRose- Jiri Tlusty and Brandon Sutter- Pay Dwyer- Alexei Ponikarovsky remained intact.  After Rutuu won a face off deep in the Caps end, Skinner picked up the puck, centered over to Jay Harrison who shot into traffic. Stewart used his size to force a position in the slot and had his stick well positioned for the deflection over the glove of Michal Neuvirth for an early Cane lead.

Coach Paul Maurice again had the Sutter line against the Caps top line of Alexander Ovechkin-Nicklas Backstrom-Alexander Semin.   That’s a whole bunch of money going against significantly less and overall, the Sutter line did an excellent job.  The fourth line of call up Drayson Boman-Zach Boychuk-Tim Brent had tremendous speed and played like they’ve been together as a line for a long time.  Late in the period, Cam Ward swung his stick on a wrap around shot, stopped the shot but also resulted in a tripping call. Early in the power play, Ovechkin had what seemed to be an open shot but Tlusty made an excellent defensive play taking away the angle, forcing the puck to the corner.  Shots after 1: Canes 10 Caps 15

At the start of the second, the Canes penalty kill team, 18th in the NHL, held off the very potent Capital power play unit that ranks 3rd in the NHL.  Right after the power play ended, there was a scrum in front of Ward, the puck slid out to the left slot with a surging Jeff Halpern a step ahead of, and possibly a trip by, Jamie McBain as Halpern was airborne when he shot the puck into the net.  Just over a minute later the Caps scored again.  After a missed stop by McBain, Marcus Johansson skated down the left wing with a nice lead pass to Troy Brouwer who hit the bouncing puck in mid air for a pretty goal, making it 2-1, Caps.  On the next Canes power play, Skinner had a goal overturned because the ref lost sight of the puck and blew the whistle a nanosecond before the shot much to the disappointment of the 16500 in attendance.  Skinner drew another penalty

less than 2 minutes later but the Canes power play didn’t really have any threatening scoring chances.  Later, Staal was called for interference and the Caps put on a passing show only to be out done by some strong defense and solid goal tending.  Shots after 2: Canes 20, Caps 23

The 3rd period started with 3 icing calls in the first 30 seconds, frustrating the Canes who were looking for some form of offensive rhythm.   On a rugged play behind the Caps goal, Ruutu was called boarding.  The PK unit was doing well but Backstrom made a cross ice pass to John Carlson at the left point for a one timer for a 3-1 Cap lead.  The Caps never go into a defensive shell and kept the pressure on to score again. Joni Pitkanen had a turnover at his own blue line, Semin quickly passed to Cody Eakin for his first NHL goal.  Maurice shuffled lines putting Skinner with Staal and LaRose.  Maurice certainly knows hockey better than I, and while I agree changing lines is needed, I would have Ponikarovsky or Stewart with Staal.  I’d even like Zach Dalpe with Staal when he returns.  Staal’s line needs size along with speed.  The Caps helped avoid a traffic jam out of the parking lot after the game when Backstrom put one with just over 4 minutes to go.

Panthers Beat: An American in Bangalore