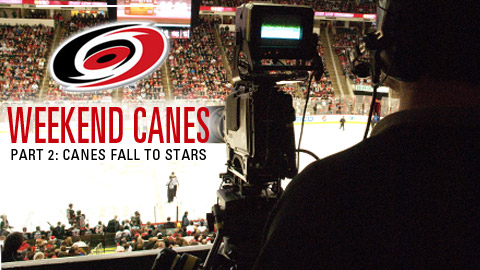 Cary-lina, NC – The Carolina Hurricanes hosted the Dallas Stars on Sunday, November 06, 2011 which was the 2500th game for the Hurricane franchise.  Dallas has surprised many outside of Texas by leading the Pacific Conference and being 2nd overall in the NHL.  The Stars only trail Chicago and if the Canes played like they played against Chicago 10 days ago, they may have fared better than the 5-2 loss.

Coach Paul Maurice said after the loss to Washington Friday night, he wanted 60 minutes of high energy and emotion on the ice as well as the bench.  Early in the first period he got just that as the Canes used their speed jumping on pucks, opening the ice and had a smooth flow of 5 line shifts in the first 2 minutes.  Derek Joslin made his first appearance as a Cane this season with Jamie McBain sitting out. A minute after a time out to repair the glass near the Canes’ bench, Dallas had a good rush up the ice finished off by a nice wrist shot by Eric Nystrom to Cam Ward’s high glove side.  Ward had to want to have that one back but it was a good shot.   With Jeff Skinner and Mark Fistric off for roughing, Eric Staal, who may not be putting the puck in the net, carried the puck from the red line to deep in the Stars end, centering a solid pass but no one was home. On the ensuing play up ice by the Stars, Staal came back to break up a pass in the low slot that had goal written all over it.

With Alexei Ponikarovsky off for boarding, the Stars scored on the power play. Mike Robeiro carried the puck down low, passed out to Stephane Robidas in the high slot for a one timer to give the Stars a 2-0 lead. A few moments later, Staal was blindsided resulting in a Carolina power play. Staal won the draw back to Tomas Kaberle who passed over to Skinner along the boards.  Skinner made a laser pass to Staal’s stick, Kari Lehtonen made a nice pad save but Chad LaRose was there for the tip in to cut the lead, 2-1.   With 28 seconds left in the period, the Stars finished the scoring for the first when Loui Eriksson hustled for control on a dump in, backhanded a pass to an unattended Jamie Benn for a stuff in.  Shots after 1, Canes 7   Stars 11

Where did the energy & emotion go to?

The Canes had a new sheet of ice to start off the second on the power play.  New ice is supposed to help the offense but this wasn’t the case. Less than 2 minutes later, Eriksson followed a shot wide of Ward, beat Joslin then made a quick pass to Mike Ryder who lifted a shot just 2 feet in front of the goal over Ward’s shoulder sending Ward to the bench.   Brian Boucher’s first save was a dandy as Dallas had a 2 on 1 after the puck jumped over Tim Gleason’s stick.  Not sure if there is some bad history but after a check by Staal near the Carolina bench, just as he was leaving the ice, Staal slashed a Star but got caught. Could have been out of frustration but down as bad as they were, it was a dumb move. Fortunately, no damage on the scoreboard.  Late in the period on a Canes power play, LaRoase couldn’t keep the puck in the zone that lead to another odd man rush for Dallas’ 3rd short handed goal of the season.   Shots after 2:  Canes 18, Stars 19

Too little, too late and not enough

The Sutter line started the 3rd as Maurice wanted his best defensive line as a matchup against the Stars’ top line.  Through hard work, Pat Dwyer forced a Stars hooking penalty.  The second power play unit of Ruutu-Zach Boychuk-Jiri Tlusty-Jay Harrison-Joslin looked good.  Crisp passing between the Harrison and Joslin kept the puck inside the blue line.  Joslin made a touch pass to Ruutu, who gathered the puck, took a couple of strides, then sent a snap wrister with eyes into the net to close the gap, 5-2. Needing all the even or man advantage ice time if the Canes were to get back in the game, Skinner took a good penalty rather than go down 6-2 as the Stars had another golden opportunity.

It’s hard to say the defense played well when you lose 5-2 on home ice, but I honestly think the defense did OK.   The 5 on 5 game for the Canes has to improve.  My personal belief is Staal needs another large body on his line. Anthony Stewart, Ponikarovsky or Zac Dalpe when he returns, or one of the other Checkers are good candidates. This team is built for speed, but needs more bangers that can make opposing players intimidated.