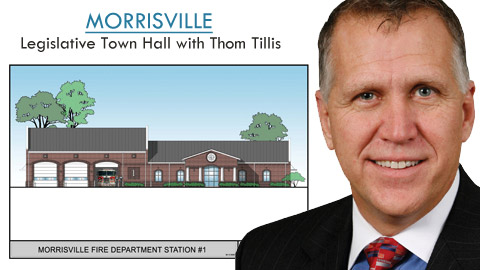 Morrisville, NC – From balancing the budget to the Defense of Marriage Act, it has been a tumultuous year for the North Carolina Legislature. On November 16, you can ask NC House Speaker Thom Tillis all about it at a Town Hall type meeting in Morrisville.

The Legislative Town Hall event is at the new Morrisville Fire Station #1.

The new fire station is 13,000 square feet with three bays and accommodations for EMS. The old station just down the road was built in 1955.

Thom Tillis represents House District 98 in the northern part of Mecklenburg county including Huntersville, Davidson and parts of Lake Norman. He was elected to office in 2006 and became Speaker this year.