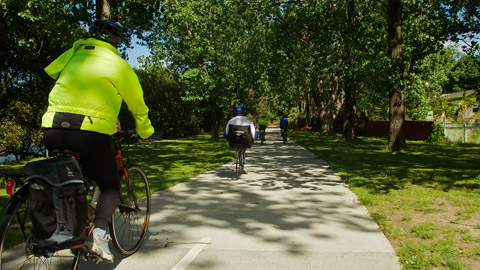 Cary, NC – A newly completed portion of Blackcreek Greenway in Cary has been recognized as an official component of the East Coast Greenway (ECG) corridor.

An Urban Trail from Maine to Florida

The East Coast Greenway system is an urban companion to the Appalachian Trail. It’s a project of the East Coast Greenway Alliance, a non-profit based in Durham. Their mission is “to partner with local, state, and national agencies and organizations to promote the establishment, stewardship, and public enjoyment of a traffic-free multi-user trail linking cities and towns from Maine to Florida.”

About 26% of the 3,000 mile trail is now established, off-road and traffic free. That’s approximately 766 miles.

The Alliance provides maps and cue sheets for the entire route and posts trail markers to ease the way-finding. It has over 14,000 members and volunteers from Canada to the Florida Keys.

Three were in North Carolina – Black Creek, a portion of the American Tobacco Trail in Chatham County and a greenway in Wilmington. Pennsylvania had two new designation. The remaining five designations came from different states.

Take a Walk on the Wild Side

There’s no better time to explore Cary’s Greenways than in the autumn.

The Black Creek Greenway, partially completed, is planned to run from Bond Park to Lake Crabtree.