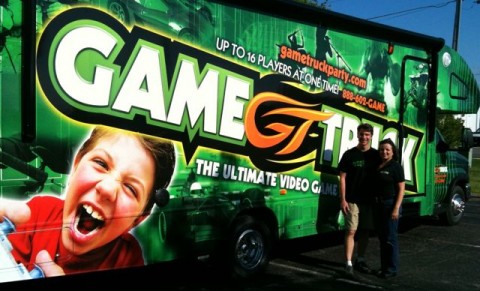 Cary, NC – GameTruck Licensing, LLC has been awarded a patent by The United States Patent and Trademark for its Method of Entertaining Using A Mobile Entertainment Environment. The patent identifies GameTruck’s unique process of entertaining people in its Mobile Video Game Theater™, and illustrates in detail the features and original concepts created by GameTruck.

North Carolina currently has one franchise, operating since May, 2011, located in the Triangle area and owned by Cary, NC residents Eric and Lizette Watko. GameTruck’s second North Carolina franchise will begin operations in Charlotte later this month.

Outfitted with big screen TVs, the latest video game consoles and newest titles, GameTruck brings a plush 16-player video arcade direct to the customer’s door. Their state-of-the-art rigs are formatted as both dual-axle trailers and all-in-one RVs, and are available for private parties, educational and fundraising events, or corporate and public events.

The Evolution of GameTruck

A successful video game developer, GameTruck’s CEO and founder Scott Novis created GameTruck with the goal of bringing video gamers a place to play together. He sees this validation as part of a journey.

“Since I first had the idea in 2004 at my son’s birthday party, to the day we built the first rig, we’ve all worked so hard to innovate every day, execute new ideas, and bring people together. It’s an honor to be recognized and protected by the US Patent & Trademark office for a concept we truly believe has unlimited potential”, said Novis.

The company has grown steadily since inception, with franchisees operating in over fifty major domestic markets. Recent international expansion has introduced GameTruck to Lagos Nigeria, and further plans involve operators in Canada and Trinidad.

“With any great idea like this, eventually there are always copycats and competitors that pop up here and there,” says GameTruck’s SVP of Franchise Licensing, Mike Watorski. “But we keep getting calls from potential franchisees wanting to join up with GameTruck. It’s a tough economy right now, and if people are going to jump into a new business they want to be absolutely sure it’s got a solid backbone”.

GameTruck’s COO, Dave Wachtel, continues, “Through originality, reliability, value, consistency and togetherness, we’ve created events like no other. Laughs and smiles. Camaraderie and teamwork.  Prices that don’t break pocketbooks. Moms, families, kids, businesses and schools all see the value in an innovative, positive video gaming environment. We believe the US Patent now puts us on even firmer ground, so we may not only defend our ideas, but also look to the future.”

Another reason that Cary is known as the Technology Town.