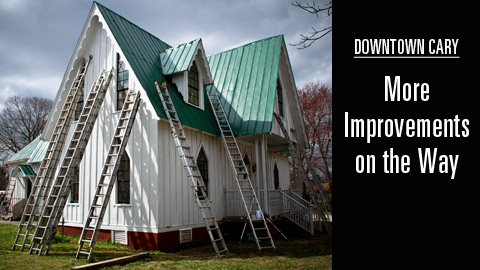 New infrastructure improvements to include water line repairs, stormwater mitigation and streetscape along a section of East Chatham from Academy to Walker.

And last but certainly not least, the town has closed on the Suggs property from Chatham to Academy.

At its work session Tuesday evening, the Cary Town Council expanded the blueprint for the recently acquired historic theater at 122 East Chatham Street to include the construction of an adjoining three-story building, bringing the total space for the downtown Cary multi-use cultural facility to 13,700 square feet. The additional space will provide the Town with the potential to host larger scale productions, expand seating, and provide rental/lease space for community and commercial uses.

Referred to as Option 2 in the work session, the plan builds on the original concept for the venue, which was once the town’s first indoor movie theater and once renovated will be used for music, theatre, improvisational comedy, and digital arts offerings, including film. Under the approved expanded option, seating for the theater will increase from approximately 165 seats to more than 200 seats and the venue will now boast a ticket booth, refreshment areas, and larger bathroom facilities. Original features, such as the theater’s lobby and main entrance, will remain intact while providing space for the facility to offer adequate storage, office, and backstage areas. The upper floors of the addition would offer additional programming spaces and could potentially serve as rental spaces or house retail businesses.

“As we began working with the consultant to plan the theater’s renovation, we quickly found that the existing building’s age and blueprint would severely limit the Town’s use of and programming for that building,” said Ed Gawf, Town of Cary Downtown Development Manager. “By adding on to the existing structure, we’ll be able to preserve the character of the original theater while bringing it up to code and ensuring it is fully accessible, comfortable, and enjoyable for patrons.”

Town officials said that the Town expects to see savings through opportunity costs by constructing the addition now as opposed to phasing it over time. They also noted that the Cary Arts Center, which opened over the summer, is already nearly fully programmed, and there continues to be a need for artistic space in the downtown.

Built in the 1940’s, Cary purchased the 7,488 square-foot building for $410,000 in July 2011. The cost to renovate the building is estimated at up to $1 million; the additional cost for Option 2 is an additional $1.7 million for design and construction. Funding for the expanded project is included as part of the $8 million allocation for downtown capital projects in the Fiscal Year 2012 budget.

Renovation and expansion efforts of the Downtown Theater are part of the Town’s overall Downtown Development program. This initiative includes revitalization through physical improvements and downtown activities and facilitation of private redevelopment in downtown. The opening of the Cary Arts Center in August 2011 was the first step in the Town’s transformation process in downtown; the Downtown Theater is the Town’s next major project and is now expected to open in the summer of 2013 with the additions approved last night.

Citizens interested in learning more about the Town’s Downtown Development program are invited to attend a community information workshop on November 29, 2011 from 6-8 p.m. at the Cary Arts Center.

Not Closed on Sugg Property?

Susan Moran, Town of Cary Public Information Officer, advised CaryCitizen this afternoon that the Town has not closed on the Sugg Property. More info as it becomes available.

A walk past the Sugg parcel downtown this afternoon showed an “under contract” sign on the lawn.