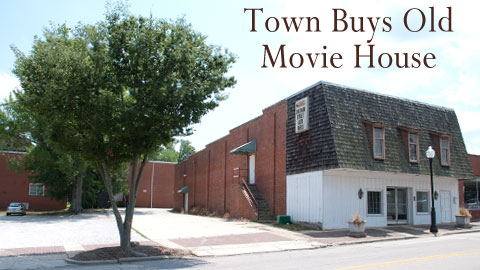 Cary, NC – Rumor no more, the Town of Cary has purchased the old Cary movie theater on East Chatham Street, lately an auto parts store, for $410,000.

The Once and Future Theater

The renaissance of downtown Cary continues to gain steam with the Town’s purchase of 122 East Chatham Street, the 65 year-old former site of the town’s first indoor movie theatre.

In the past, the building has also been a clothing store, auto parts store and recording studio.

The Town intends to renovate and repurpose the 7,488 square-foot building over the next 12-18 months as a multi-use cultural facility with a projected focus on music, theatre, and digital arts including film.

The initiative, which may cost up to $1 million for repurposing, is being paid for as part of the $8 million allocated for downtown capital projects in the Fiscal Year 2012 budget.

The purchase is also in line with the 2006 Town Council-approved Town Center Civic and Cultural Arts District Study which provides a framework for creating a cultural arts district within downtown Cary.

“Its location in the heart of Cary’s downtown and its early history as Cary’s first indoor movie theater were key factors in the Town’s decision to immediately proceed with the project,” said Ed Gawf, Downtown Development Manager.

Town officials hope to proceed with design bids and consultant selection next month; the project is expected to get underway this winter. The facility is anticipated to be ready for public use by the end of 2012.