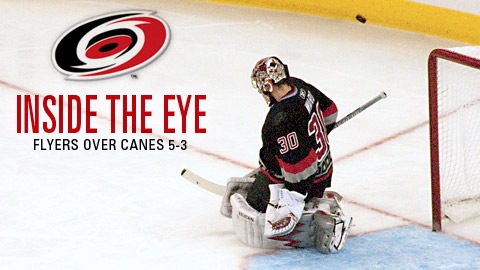 Cary-lina, NC – The Carolina Hurricanes hosted the Philadelphia Flyers on Monday in a rematch of their 5-1 shellacking in Philly back on Oct. 29, 2011. Once again, the Flyers prevailed, this time by a score of 5-3.

Cam Ward started between the pipes this time and the Canes were without Joni Pitkanen who has a lower body injury. Canes fans know most of the player trades with Philly that for the most part went in the Canes favor, but another interesting link is Coach Paul Maurice was drafted by the Flyers in 1985.

A key for this game is to neutralize the high power line of Sean Couturier-Jaomir Jagr- Scott Hartnell who combined for 9 points last game. The Flyers have size but the Canes have speed. Early in the first on a partial line change, Jagr made a nice leading pass to Claude Giroux who went in on Ward with a shot to the high glove side for a 1-0 lead.

That goal appeared to wake up the Canes as they became more physical with Tuomo Ruutu banging anyone wearing an orange sweater. Jamie McBain mishandled the puck behind Ward, where Matt Read made a quick pass to the low slot for a one timer by an open Maxime Talbot to make it 2-0. A minute later Ward made a phenomenal glove save on Couturier who was untouched right in front of Ward. By the way, too many opposing player have been open down deep lately.

On the next face off, Bryan Allen and Zac Rinaldo were both sent off for roughing. Allen, I’m sure, was trying to send a message and get the Canes going. The Canes had most of the puck control during the 4 on 4. Brandon Sutter had the puck behind the Flyer net and took his time with a beautiful pass out to Eric Staal racing in for a great shot only to be outdone by goalie Sergei Bobrovsky. Late in the first, Ruutu got called for a slash. After the face off the puck was loose just outside the crease with the Flyers hacking and whacking until Tim Gleason and Allen cleared bodies and the puck from any threat. With just seconds left in the period, Pat Dwyer stick checked the puck from the Flyer defenseman at the blue line, Stall picked it up and threaded a beautiful leading pass to back to Dwyer who put the Canes back in the game at 19:59 with the Canes 4th short-handed goal of the season. Shots after 1: Canes 7 Flyers 12

The new ice opening the 2nd period didn’t help the Flyers on the last-minute of their power play as the penalty killing team of Staal-Sutter-Allen-Gleason did a nice job. After the penalty ended the Canes were pressing keeping the puck in the Flyers end. The Flyers finally cleared the puck with Jagr making a pass to Giroux who shot high glove side from high in the face off circle for a 3-1 Flyer lead. The Canes were on the back end of consecutive “Too Many Men” penalties by each team. The Flyers put big bodies in front of Ward that the defense couldn’t clear. Giroux took another low shot into traffic, the puck hit Wayne Simmonds stick for a five hole goal chasing Ward from the net. The Skins-Finns line put on a passing exhibition coupled with speed that ended in a quick snap wrister by Ruutu to cut the lead, 4-2. Shortly thereafter, the Canes had another power play. Maurice had 4 forwards with Tomas Kaberle as the only defenseman in trying to spark a power play that has gone frankly, powerless. A different look, but the same results. Shots after 2: Canes 15 Flyers 21

On the first shift in the 3rd, Jeff Skinner, playing in his 100th NHL game, was called for holding. The Flyers pulled the goalie for the extra man but play stopped when Skinner touched the puck by taking a shot at the empty net that hit the boot of a Flyer. Jacub Voracek took exception and gave Skinner an arm across the face, negating what was to be a Flyer power play. With Tim Brent in the penalty box, Dwyer intercepted a pass at his own blue line, used his speed for a rush directly to the Flyer goal only to be taken down from behind as he was shooting. Dwyer connected on the penalty shot which counted as his second short-handed goal of the night and put the Canes into the NHL lead with 5 shorties. Late in the period on a turnover by LaRose, Voracek picked up the puck made a pass to Read who sent many of the fans on their way home as the Flyers went up 5-3. The Canes’ 5 penalties in the 3rd has to be addressed.