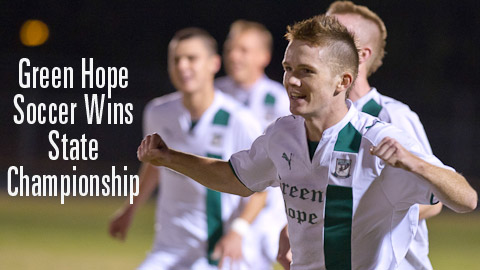 Story from staff reports. File photo from by Tom Mousseau.

Green Hope trailed early in the game, but tied it up to send the championship match into overtime.

In the second OT period, the Falocns managed to get a score and hold off Myers Park until the final tick.

Andrew Chadwick, coaching his last game for the Falcons, filed these brief notes on Max Preps:

Green Hope ends the season 25-1 and captures the 4A NC State Championship with a 2-1 OT win over Myers Park. Green Hope came from behind in 3 of the 6 playoff games. In the final, down 0-1, Green Hope equalized, then score in the 2nd OT to win 2-1! Amazing season!!!

We’ll have photos of the match later in the week. But for now, it’s time to hang another championship banner in the metaphorical rafters of the town.

Inside the Eye: Canes Blanked Again
Scroll to top