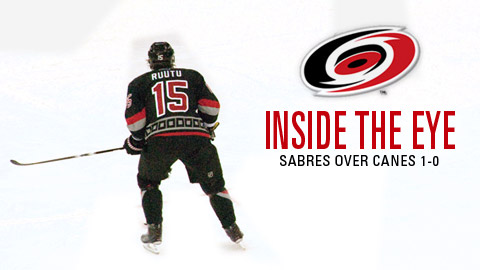 Cary, NC – The Carolina Hurricanes had a lot on the line Friday Nov. 18th after the horrible performance in the 0-4 loss to Montreal.

The Buffalo Sabres beefed up over the summer on the blue line.  Brian Boucher had a surprise start in goal and played great.  There’s not much love between the Canes and Sabres in every aspect.

Buffalo fans are…let’s say…a special breed.  Confession: my college roommate, great guy – and very smart, except he’s a Sabres fan. I try to not hold it against him.

Great Effort But Nothing To Show For It

The line of Brandon Sutter-Pat Dwyer-Alexi Ponikarovsky started the game which was a good move as that line has actually played well over the past few games.  Eric Staal’s line had Anthony Stewart, for speed and size, along with Chad LaRose. The Skins & Finns line, Jeff Skinner-Jussi Jokinen-Tuomo Ruutu, remained in tact. The Canes looked sluggish in warm-ups but turned it on early in the first period.  Not many solid shots but skating with a purpose and good forechecking.

After LaRose got hit with a high stick, the Canes first power play had food puck possession but only 1 shot.  A little while later, after a slash by Jussi, the Sabres power play got a gift when the puck hit Tim Gleason’s skate right in front of Boucher to allow Jason Pominville jam it under Boucher’s pads.  Nifty forechecking by Sutter kept the puck in the Sabres’ end that resulted in shots by all 3 forwards.  The fourth line of Tim Brent-Zach Boychuk-Juri Tlusti showed how speed, desire and skill can create scoring opportunities.

Despite being down 1-0 after the first, the Canes looked better than up in Montreal, and did have the puck more in the Sabres’ end. The defense was all over anyone close to the crease. While the shots after the 1st were in Buffalo’s favor, 10-6, that was mostly because they got shots on their power play.

Justin Faulk, called up from Charlotte, is only 19 but is a very talented stick handler and logged 22 minutes.  Early in the second period, he carried the puck down low and made a good move to the net.  Late in the period, he had a shot from the point that hit the pipes.

In the defensive end, Staal did things that will never make the score sheet and go unnoticed. On offense, he frankly needs more support.  While not technically double-teamed, you can see the defense cheating towards a double team when he has the puck or gets near the slot.  That obviously opens up the wings.  Most of the shots taken by the wings were second chances off shots by the blue liners.  Very late on a  shift, Staal had a feed from Stewart for a one timer, from about 12’, that was a rocket – only missing the upper corner by inches.

Very late in the 2nd, Skinner made a hard pass across the crease.  The rebound off the boards went to Bryan Allen who made an excellent pass back to Skinner charging in from the corner to the slot for a deflection shot.  It’s more movement like that that the Canes need to do to generate more offense.  Shots after the 2nd: Canes 20,   Sabres 14

This month is Movember where moustaches are grown in support of awareness for men’s health. Faulk’s moustache looked like a 19 year old’s, better than mine would have been at that age, but no where close to the woman wearing a Sabre’s sweater in section 316. I’M JOKING!

Will the Puck Ever Go In?

The third opened with the Sutter line. On shear strength, Ponikarovsky stole the puck, cleared the zone up to Dwyer who drove to the net for a good shot.  After a minor threat by the Sabres, rather than make an uncontrolled clear, Stewart held on to the puck, then made a rush to the offensive end.  He dumped the puck behind the Sabres goal that allowed Staal to use his size and speed to get the puck.  Staal made a gutsy play centering the puck but no one was in the slot on their feet as the Sabres beefy defense used their size.

Boucher’s best save of the game came off of Thomas Vanek’s stick from a hard snap wrister from 12’ out front.  Brian Allen is sure to be off the Sabres’ Christmas card list as he was pounding anyone wearing a white sweater.  On the bench, he and assistant coach Dave Lewis seemed to be checking names off a hit list but were more likely charting defensive strategies.

Coach Paul Maurice warned that Boychuk may get time on Staal’s line and he did.  Boychuk is a skilled player but not a big guy.  It would have been nice to see Stewart as well on that line as he can be a physical force the opposition would be concerned with; allowing Staal and Boychuk more open ice.

With less than 4 minutes to go the Canes had a power play.  Would Maurice pull Boucher for a 6 on 4?  Might have been interesting, but didn’t happen.  The Canes had their chances but just couldn’t put one in.  After the power play was over, the Sabres had a rush and LaRose took a bad penalty leaving the Canes shorthanded the rest of the game.

Despite playing an overall good game, losing again was bad. Even worse, was hearing those Sabres fans after the game.  Shots for the game: Canes 34, Sabres 20

Canes Trivia: How many hat tricks does Hall of Famer Ron Francis have wearing a Carolina Hurricane sweater? Respond in the ‘Leave a Reply’ below.  No prizes, just for the fun of  it!  Answer will be in the next article.