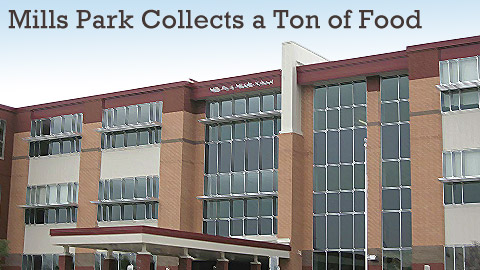 Mills Park Middle School is in its second year of existence and has a tradition of giving back to the community.  MPMS hosts food drives, collects recyclables, supports the troops, raised money for Juvenile diabetes and collects pet food and supplies for a local animal shelter.   Last year, the 6th grade Lions team began the tradition of a food drive.  December of 2010, Mills Park MS delivered one pound of food for every student in the school. This was enough to provide 999 meals.  This year MPMS set a goal to deliver 2000 pounds of food to the food bank of NC and exceeded that goal.  We delivered 1.73 pounds of food per student for a total of 2276 pounds of food.

The Food bank of Central and Eastern NC hosts Students Against Hunger food drive.  Over 75 schools have registered to help fight hunger in our area. Colleges and universities are also involved this year.  They have already collected nearly 25,000 pounds of food. The Food Bank of CENC will help over 180,000 children who are at risk of hunger.  The Students Against Hunger drive will continue through Dec. 3. If your school is interested in participating visit www.foodbankcenc,org/SAH   Schools that choose to compete to collect the most food and funds and will be honored during the annual Heart of Carolina food drive! Competing schools must deliver their food and funds to the warehouse by noon on December 3, 2011.