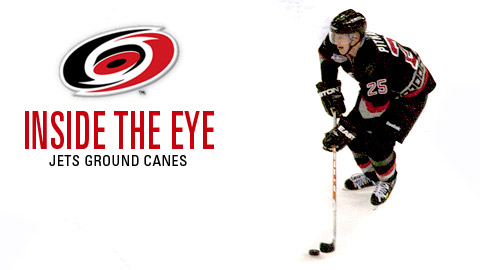 Cary-lina, NC –  The Carolina Hurricanes had the Winnipeg Jets in town the day after Thanksgiving for a Southeast Division matchup.  The Canes have 4 of the next 5 games at home and need to win all as they’re against Eastern Conference teams.

The Canes have also played more games than any NHL team this season so a flat-out win is a must.  Unfortunately, that didn’t happen as they lost 3-1 in a disappointing performance.

The Canes said they were going to work on their power play at practice on Thanksgiving day, but with the 2 power plays in the first 5 minutes, the outcome was the same: no goals and only 2 shots.  One of the best shots was from Bryan Allen from the left point that made its way through traffic, only to bounce off Chris Mason’s pads.  At the other end after a turnover behind the Canes goal, the Jets centered the puck.  Cam Ward made 2 reflex saves in less than a half a second off  Eric Fehr’s stick.  Jeff Skinner held onto the puck after being badgered by 3 Jets then got the puck over the blue line with a backhander as he face the boards.  He then got hit from behind by Fehr for what appeared to be an obvious boarding penalty that wasn’t called much to the loud disappointment of the partisan crowd.  Skinner turned around and with the puck in the vicinity, then returned the check to Fehr, legally, to the enjoyment of everyone in the stands. When the whistle blew a few moments later for an offsides, some of the Jets made it known they didn’t like Skinner’s check but Derek Joslin made it clear it was perfectly fine by pure intimidation.  On the next shift, after a turnover by LaRose in front of the Jets goal, Evander Kane picked up the puck, skated 100’ using Blake Wheeler as a decoy on an odd man rush and sent a hard wrister over Ward, high glove side for a 1-0 Jet lead.  Shots after 1:  Canes 7, Jets 14

I’ve already been caught standing and cheering a nice play but fortunately caught myself halfway out of my seat with one clap of my hands before remembering ‘The Rules of press row”.

This was because of a nice clear by Jamie McBain to Brandon Sutter, who carried the puck over the blue line then had a great touch pass to Jiri Tlusty who skated across the face off circle, yo-yo’d the puck 3 times, then sent a shot over the right shoulder of Mason to tie it up 1-1.

After getting pushed off the puck in the offensive end, the Jets skated up ice and took the puck deep in the Canes zone.  After a  pass back to the point, Nik Antropov took a shot on net that Ward saved but former Hurricane Andrew Ladd had the position and out-muscled the defense on the rebound knocking it in for a 2-1 Jet lead.  That turned out to be the game winner and Ladd also had the game winner against the Canes in the earlier meeting this season in Winnipeg.  Shortly afterwards, the Canes had an opportunity to get the crowd back into the game with another power play but it was weaker than the first 2, with no shots on goal.  It was nice to see Alexei Ponikarovsky use his size and strength digging at the puck in the corner and getting it to skilled player Jussi Jokinen.  Former Atlanta Thrasher, Anthony Stewart also used his size, strength and speed as he carried the puck despite a Jet all over him, then made a crisp pass to McBain cutting to the net for a shot stopped by Mason.  McBain slapped his stick against the glass in frustration as he knew he should have put that one home.  Shots after 2:  Canes 11   Jets 27

Go The Other Way

After the first 2 periods the Canes had 19 missed shots while the Jets were more accurate with just 9 going wide or high. The Canes also had 9 giveaways, which happens for a variety of reasons; top of the list in this game was being pushed off the puck. Sometimes it was with very little effort by the Jets.

After about 3 minutes of the puck in the Canes end, a booming voice in section 324 summed it up for the rest of the nearly 16,000 in attendance: “Go the other way!”

The Canes had an opportunity when Poni knocked a Jet off the puck, passed up to La Rose who left a drop pass back to Poni for a rocket of a shot – that went wide. Another power play a few minutes later for the Canes, and another no-shot effort.  Eric Staal made a real sweet pass, one-handed, across the front of the crease for a gimmie but no one was home.   The Jets were content with the 2-1 game as all they did in the third was cross the red line and dump the puck with one chaser. They only had 2 shots on Ward the entire period.

With about 2 minutes to go, Skinner settled the puck and made a beautiful pass to a rushing Tomas Kaberle for an open netter. The crowd roared, the storm horn went off but the shot, like so many others, went wide again.

With 1:23 left, the Canes pulled Ward and with 9 seconds left, Bryan Little sealed the game with an open net goal.   At the end, the Canes had 27 missed shots and about 14 giveaways.  Both areas have to improve. Shot totals:  Canes 21, Jets 30

Trivia: What Hurricane had the most assists in a season?

Answer to ” What Hurricane has the most consecutive games with assists”?  Both Rod Brind’Amour and Matt Cullen had 8.

Inside the Eye: Shoot Out Loss to Habs
Scroll to top