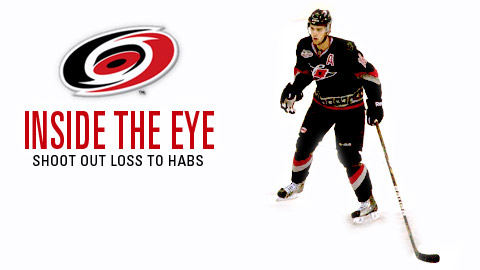 Cary-lina, NC – The Carolina Hurricanes hosted the Montreal Canadiens the night before Thanksgiving and really needed this game in more ways than one.  At the end, they lost 4-3 in a shootout, which is a horrible way a professional sport should determine the outcome of a team game.

The Canes did garner a point but allowed a team ahead of them in the standings to gain 2 points.  Just as baseball has an unwritten policy the playoffs are determined by the All Star break, hockey’s tradition is Thanksgiving.  Every year has a team breaking, or severely challenging that rule, and the Canes will be that team this year.

The Canes hit pay dirt on the first shift, 34 seconds into the game. The line of Brandon Sutter-Juri Tlusty-Pat Dwyer started against Montreal’s top line again. Long time Canes and fan favorite, Erik Cole made his first appearance at the RBC Center not wearing the familiar 26 Canes sweater. It was interesting to see who Cole would first check into the boards: new Cane Bryan Allen.  Deep into the Habs’ end, Dwyer took a shot that was kicked to the boards.  Sensational rookie Justin Faulk pinched in, skipping the puck back over to Dwyer who made a cross ice pass to Tlusty.  Tlusty made what appeared to be a soft shot that was probably done for just getting the puck on net as he was at the blue line. The puck had eyes, hit the post, skirted the goal line then had some help from goalie Carey Price as he went to lay on the puck, he knocked the puck over the line.  The fourth line of Tim Brent-Anthony Stewart-Brett Sutter has speed, size, talent and are aggressive.  That combination paid off at the 6 minute mark when Sutter took the puck off the top of the net with his stick, passed to Brent behind the net who made a real nice behind the back pass to Stewart perfectly placed in the slot who hammered a one timer to the right of Price to put the Canes up 2-0.

Cam Ward was sharp in the first, and he had some help from the pipes as Montreal hit the iron twice in the first.  Most goalies will say they knew it was wide. For those that aren’t aware, a shot hitting the pipes does not count as a shot on goal.  Shots after 1: Canes 5, Montreal 7

The Canes had a couple of power plays early in the second period.  Late on the second power play, the Canadiens penalty kill unit did a nice job as they had more shots than the Canes power play.  Weak defense at the Canes blue line allowed the Habs to keep pressure on Ward with Lars Eller putting in a rebound for a shorthanded goal, cutting the lead 2-1. That seemed to be a turning point as the Canes just couldn’t get anything going after that.  Passes weren’t on the tape, too many cross ice passes moving up ice rather than carrying the puck into the zone and some Canes were pushed off the puck just too easily.  The line of Eric Staal-Tuomo Ruutu-Jeff Skinner had Montreal’s top checking line and defense on them all night.  They didn’t make the scorecard but were very effective on keeping the puck in the attacking zone much of their time on the ice. On one shift both Ruutu and Staal delivered hard checks that sent a message that line was more than a shooting line.    Shots after 2:  Canes 18, Montreal 19

The Canadiens scored early in the third on a tip in by Mike Cammalleri after a wrist shot from the point.  Cole was moved to that line in the second period and it paid off as his checking opened the ice for his veteran linemates.   On a nice play with the Sutter line carrying the puck into the Habs’ zone, Dwyer went deep in the corner and made a beautiful centering pass to Brandon Sutter who had a step on the defense for a nice touch shot that slid under Price for a 3-2 Cane lead and bringing the crowd of nearly 15000 back into the game.  The Canadiens are a good team and didn’t let up.  They had another shot hit the post then a minute later with heavy traffic in front of the net, a missed check along the board allowed a shot from the blue line for a tip in, knotting the game at 3-3.

The rest of the game was up and down hockey, with a shot and nice save by both goalies. Very late in the game, Cole made one of his trademark power rushes down the right wing cutting into towards the goal that had many fans worried.  Fortunately Ward was in goal.   As the game ended Brian Gionta and Alexi Ponikarovsky knocked into one another. Many fans thought there might have been an altercation between the 2 but when 5’7” Gionta saw it was 6’4” Poni, he made a wise choice and headed to the bench.  Gionta is both talented and smart.  Shots after 3: Canes, 31  Montreal 31

Both teams had their chance during overtime.  The Canes best chance was from Staal who, late on a shift, had a hard slap shot while he was falling that hit right on the curved corner of the pipe.  In the shootout, the Canes went 0 for 3 while Montreal was able to put one by a very frustrated Ward.   Interesting statistic: both teams had more shots short-handed than while on their power plays.  Canes will be having a Thanksgiving practice with power play one main area of focus.

Trivia:  What Hurricane has the most consecutive games with assists?

Answer to: Who is the Canes all time leader in penalty minutes?  Erik Cole with 494 minutes

Inside the Eye: Jets Ground Canes