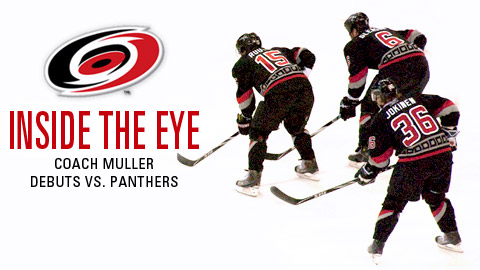 Cary-lina, NC – The Carolina Hurricanes hosted the division leading Florida Panthers under new coach Kirk Muller at the RBC Center Nov 29.  While they lost 3-1, really 2-1 (a late empty-netter), the team did skate better and hit more, probably to impress the new coach.

Nonetheless it was a loss, and it’s getting old.  The Canes, earlier the same day, picked up forward Andreas Nodl on waivers from the Flyers.  He’s young, 24 years old, and has decent size at 6’1”, 196 pounds. He’s a good skater and a good stick-handler.  Jury is out whether of not he’s a Ruutu-type banger along with his size.  He should give the Canes more options with larger forwards to complement more of the highly skilled players.

In the first period, the Canes came out on fire.  They attacked the Panthers’ goal, clearly had more puck possession time and more shots.  Early in the game, Brandon Sutter used his size and strength to hold onto the puck behind the Panthers’ net, gave a beautiful centering pass to Pat Dwyer cutting in on goal, only to be stopped by a pad save by Josef Theodore.

Joni Pitkanen had an excellent game overall and many times acted like a fourth forward.  He frequently carried the puck in the offensive zone, especially when the line of Eric Staal-Jeff Skinner-Tuomo Ruutu were on the ice.  One time he came in on the left side, had a give and go with Staal, then made a centering pass to Ruutu.  Ruutu skated pass on defender, took a good shot that Theodore stopped.  Staal was in position for the hacking and whacking follow-up but couldn’t put it home.   Very late in the first, the Panthers had good formation coming in the Canes zone with just the 2 defenders trying to thwart the attack.  Kris Versteeg was carrying the puck up the left center area when Dereck Joslin made a great play by jumping forward and hammering Versteeg to the ice.   Shots after 1: Canes 9, Panthers 2

Early in the second, Skinner carried the puck down the left side, into the corner, while being mauled. He managed an unbelievable centering pass to Staal who got off a rocket but Theodore made a better save. The Staal line had a great game both on offense and defense.  Skinner draws an inordinate amount of penalties.  Sometimes the only way to stop him is to hold him, or try to hold him, as he is extremely strong on his skates.  He drew 2 penalties in the second period alone.

On one Canes power play – a telegraphed pass – Tomas Kopecky picked up the puck and skated straight to Cam Ward but rookie Justin Faulk made an excellent play to stop a shot.  Midway through the period, Pat Dwyer got called for the softest boarding penalty in the history of hockey.  It took the Panthers all of 13 seconds to score on a bullet by Tomas Fleishmann, high glove side of Ward off the post. Giving credit where it’s due, it was a great shot.  Two shifts later, perseverance paid off as Ruutu put the puck deep, Stall dug it out of the corner, made a cross ice pass in front of the goal to Skinner who steadied the puck, then somehow got the puck between the pads and post to tie the game up 1-1.  Shots after 2: Canes 20, Panthers 14

Both Jussi Jokinen-Alexi Ponikarovsky used their speed and strength early in the third and kept attacking the Panthers goal. Poni at one point look like a human steamroller, knocking opposing players to the ice. A little while later, Mike Santorelli had a breakaway on Ward.  Pitkanen all but hog-tied him to stop any type of shot with Joni ending up in the net looking up at the ref with a “who me?” look on his face.

Santorelli gathered up speed on the penalty shot but Ward made what appeared to be a nonchalant save.  Ward is that good – making penalty shots appear easy to stop. The Sutter-Jiri Tlusty-Dwyer line had several chances in the third with excellent forechecking and tenacity in the offensive zone.

With a little over 3 minutes to go Tomas Kaberle in the far corner made a clearing pass along the boards that was stopped inside the blue line. The Canes thought the puck would clear the zone, but with the puck going against the grain landed on the stick of Shawn Matthias who jammed the puck between Ward’s pads and the post.

The Canes pulled Ward a little while later for the 6th attacker, but after losing the puck at center ice, Matthias put in an empty netter at 19:11 sending the crowd home disappointed. Once more.
Shot totals:  Canes 27, Panthers 21