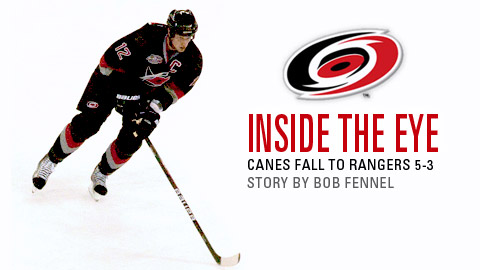 Cary-lina, NC – The Carolina Hurricanes hosted the red (and blue) hot New York Rangers on Dec. 1, 2011 at the RBC Center.  The Rangers have a powerful offensive and a very stingy defense as they have the lowest goals against in the NHL.  The Canes lost in the first meeting, 5-1, at the Garden on Nov. 11.  Thursday night’s game ended with a similar result, 5-3 in favor of the Rangers.

Earlier in the day, Canes added John MacLean as a bench coach, who was a team mate of new coach Kirk Muller, and is a personal friend of Muller’s with a very good hockey resume.   I remember him as a player, mostly for the Devils and will be interesting to see if he instills the same same intensity and grit he had as a player.

Not that the +/- statistic is always that meaningful, but the Canes have only 2 players on the + side while all the Rangers are on the + side.  The Staal line was on the ice for the empty netter last game wiping out the +1 they would have had.

A Game of Seconds

The Eric Staal-Jeff Skinner-Tuomo Ruutu line started and had an excellent shift getting off 3 quick shots in 33 seconds.  The second line, on the next shift, needed only 2 seconds for a shot and goal.  Brandon Sutter won a faceoff back to Jiri Tlusty for a snap wrister into the upper left corner.  27 seconds later, Justin Faulk got called for tripping at the blue line. It took only 42 seconds for the Rangers to score a power play goal.  Brad Richards took a shot from the point and Ryan Callahan was left unattended in front of Cam Ward.  Ward made a pad save on Richards’ shot but Callahan was there for the easy tip in of the rebound.   Size does matter as 6’3” Anthony Stewart easily welcomed Sean Avery’s face to the ice on what appeared to be a simple forearm check.

Midway through the period, the Canes had a power play that had more movement and shots.  While it didn’t have the happy ending of a goal, it was a good sign of something different; something better.   A bad line change resulted in a bench penalty for the Canes with 2:33 left in the first.  Ward and the PK team were solid as the Rangers kept the pressure on but got off only 2 shots.  Late in the period, Staal won a faceoff back to Joni Pitkanen whose shot was blocked with the puck going up in the air like a basketball alley-oop play.   Skinner caught the puck, settled it to the ice, and patiently hammered a slap shot from 16’ out with 8.7 seconds left.

The second period started off with both teams having been told more shots are needed.  Staal and Skinner greatly complimented each other to keep the puck in the Ranger’s end.  They seem to have a sense of where each other is on the ice at all times. Ruutu is a checking and hitting machine, making sure the opponents now that line has skill and toughness.  Sneaky-dirty Pitkanen got caught whacking at a Ranger then held the bruised body just a wee bit too long against the boards.  Right after the penalty was killed, the Canes couldn’t clear the puck. Brandon Dubinsky took a shot from the blue line with Ryan McDonagh tipping it in.

The Rangers took advantage of another slow line change, had a 2 on 1 with sharpshooter Marian Gaborik converting. 117 seconds, either poor checking or confusion as to who was covering whom, an open Sean Avery had a one timer from inside the faceoff circle without a Cane within 10’ of him. New coach Muller called a wise time out and had Stewart join Staal and Skinner for a shift.  Ruutu was back on their next shift and all 3 did some great checking to keep the puck deep.  Staal dug the puck in the corner, passed it back to Derek Joslin at the point.  Joslin skated to the center of the blue line and sent one in for his first goal of the season.

A poor clear by Chad LaRose allowed the Rangers to keep the puck in the Canes end.  With the Rangers keeping the pressure on, Tomas Kaberle was called for holding but the Rangers kept possession of the puck and Michael Sauer put one in from the blue line with Ward screened.

The coaches behind the Canes bench are active and always talking to players.  The players all nod, acknowledging the words of wisdom and encouragement. After Skinner was checked hard into the boards by Brian Boyle, Stewart decided to let Boyle know the refs missed a call. The game misconduct penalty was a joke.  Despite another poor clear, the Canes killed off the Rangers’ man advantage.  Pitkanen took a shot from the point that a Ranger forward slid to block.  What he didn’t count on was using his head to block the shot as the puck appeared to get him just below the helmet on the side of his head.   The Rangers went into a defensive shell the rest of the game and only had 4 weak shots in the period.

Triangle Expressway Opens This Week – Get a Transponder
Scroll to top