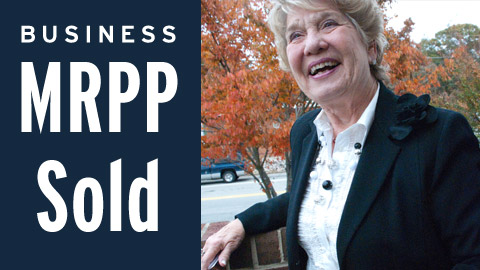 Cary, NC – MRPP, the full-service media agency founded by Sheila Ogle, has been sold to a firm in Tennessee.

MRPP, which stands for Media Research Planning & Placement, has been an anchor of the downtown Cary business scene since 1987.

Sheila Ogle is vibrant entrepreneur and community contributor. She and husband Carroll purchased and renovated The Pink House on Academy Street (also called the Guess-Ogle house) in 1994. In 2001, Sheila and Carroll bought and renovated The Matthews House on Chatham Street. Sheila was the first woman inducted into the UNC Advertising Hall of Fame and is a founder of the Cary Community Foundation.

Ogle will remain a consultant for the new owners of MRPP.

The buyer of MRPP is AdStaff Media, owned by Eastport Holdings in Memphis, Tennessee. AdStaff Media does placement and planning similar to MRPP. Eastport also owns a string of community magazines.

Bubba Patton, partner in Eastport, said “AdStaff Media completed this asset sale purchase as part of our efforts to do more business in the Research Triangle market.”

Sheila Ogle added “While I have enjoyed starting and growing MRPP for a quarter century, I can now devote more of my time and resources to other local projects.”