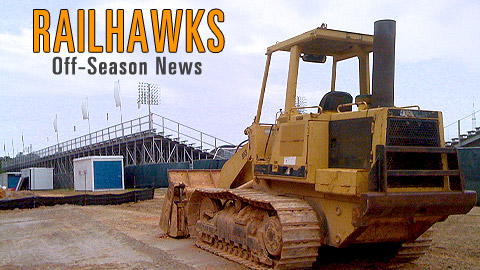 Cary, NC – Just seven weeks into the off-season, it’s been a busy time for the Carolina RailHawks, Cary’s professional NASL soccer team. They’ve hired a new coach, set the first two games of 2012 and are getting a stadium expansion.

Last week, the RailHawks introduced new head coach Colin Clarke to the public and the press at Page-Walker in downtown Cary.

Clarke comes over from arch-rival Puerto Rico Islanders. The Hawks and the Islanders have been dueling it out for division leadership for the past couple of years, and the selection of Clarke makes perfect sense.

Prior to coaching Puerto Rico, Clarke was head coach for the Dallas Burn and the Richmond Kickers. In Richmond, Clarke worked directly with RailHawks president Curt Johnson, GM of the Kickers at that time.

As a player, Colin Clarke played professionally in England for twelve years, including stints with first division clubs Southampton, Portsmouth and Queens Park Rangers. He play for N. Ireland in the 1986 World Cup and appeared in 38 games for the Northern Ireland national team. From the RailHawks:

Appearing 38 times for the Northern Ireland National Team, Clarke recorded a World Cup goal, a hat-trick, and finished his career as the all-time leading goal scorer for Northern Ireland.

First Game is Against the Old Coach

No pressure on the new coach, but the first game is against the old coach, Martin Rennie, and his MLS Vancouver Whitecaps.

It will be the season’s first exhibition match on Sunday March 4, 2012.

“Hosting a high profile Major League Soccer exhibition against Martin Rennie and the Vancouver Whitecaps FC is the perfect way to begin our 2012 season,” said RailHawks President Curt Johnson.  “We want to test ourselves against MLS on the field and continue to showcase our fans, WakeMed Soccer Park, and the new RailHawks organization to soccer fans throughout North America.”

The Hawks also announced that the 2012 home opener will be on Saturday, April 14, 2012 against the Atlanta Silverbacks.

The season opens a week earlier with the RailHawks away against the NASL champion Minnesota Stars.

In the meantime, work has begun on a ten-month expansion of Wake Med Soccer Park to 10,000 seats. 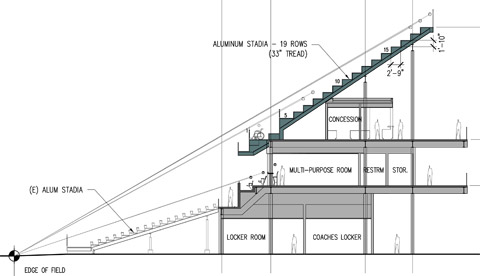 $5.8 million comes from Wake County and the City of Raleigh hotel and food tax, known officially as the interlocal occupancy tax. The stadium was built in 2002 by Wake County on land provided by the state of North Carolina. According to the Town of Cary, 360,000 fans annually visit Wake Med Soccer Park bringing an economic impact of $12 million to the region.

The main impetus to expand the stadium is to stay competitive with other cities for lucrative NCAA matches. Over this last weekend, the UNC Tar Heels won the NCAA College Cup soccer championship over Charlotte by a score of 1-0 in front of 8,777 fans at Regions Park in Hoover, Alabama just south of Birmingham. In the past, Cary has played host to NCAA Div I, II and III men’s and women’s matches.

For RailHawks fans, the expansion means more amenities and more choices for seating and groups. Players, coaches and refs will enjoy the new locker rooms. Construction is scheduled to be completed in the Fall of 2012.