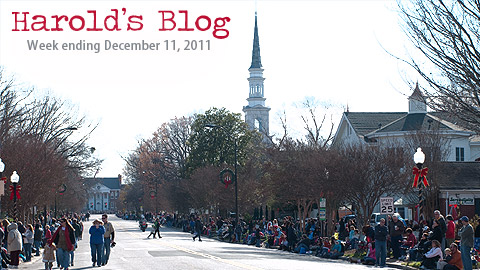 From the blog of Cary Mayor Harold Weinbrecht, covering the week through December 11, 2011. Photo by Hal Goodtree.

Cary, NC –  This week was filled with events and meetings.

Since I had no scheduled meetings or events on Monday, I spent time on the State of the Town message. During the rest of the week I reviewed and fact checked the best I could. Tomorrow it goes to the Public Information Office for further fact checking and review. We will tape it the following week for Cary TV and I will give it live for the first time at Glennaire on January 7th.

Tuesday I had a phone meeting with the town manager to catch up on items. There was really nothing new and only status updates which is the reason we decided to use the phone.

Later Tuesday I went over my appointments of council members to inner town committees and external committees. It is important that council members share responsibility and are placed in an environment that they can provide the most benefit to the town. My appointments will be the first order of business after I am sworn in for my second term on December 15th.

Wednesday was a very busy day. It started in the morning with brief on air spot with WTVD for the Heart of Carolina Food Drive. I have done this each year as a mayor. Basically, I go on air and urge everyone to bring can food by to fill up the truck. These trucks are located in Cary, Raleigh, Durham, and Fayetteville. The contents will be distributed to the various agencies that serve the public such as the soup kitchens.

I believe Cary and its citizens are blessed. We all should give at least a little to help those that are not as fortunate as we are.

At mid-day I had the honor and privilege of being the greeter of several hundred employees at the town’s holiday luncheon. I was joined by council member Smith and council-elect Bush. This year I shook hands with 600 to 650 people. I was then able to give them a few words of thanks before I left. The 1100 folks that work at the town of Cary have dedicated their lives to service. It is because of them we enjoy such a high quality of life. Words cannot thank them enough for the great job they do. I am honored to be their mayor.

On Wednesday night after a private dinner meeting I attended CAP (Citizens Assisting Police) team appreciation dinner held at Bradford Hall in the Carolina Preserves. CAP is a great group that enjoys helping and each other. There are over 150 active CAP members compared to just over 180 Cary Police Officers.

Hopefully one day we will have a one to one ratio. I gave a few comments which included:

“… I always say that the hallmark of Cary’s strength and success lies in the ideas, talent, and commitment of the people who call our community home.

… Regardless of race, age, city or country of origin, those who come to Cary give back to Cary, making Cary one of the greatest places to live, work, do business, raise a family, and retire in America.

… As CAP team volunteers, you expand the reach of programs and activities, and you offer knowledge, energy, and expertise. …”

I had a great time and I believe the hundred or so in attendance did as well.

Thursday the council had their group picture taken. This is the picture that will be on the website until the group changes or four years pass. The photographer took two sets of pictures. I was right-center on the first set and center on the second set. One thing that was a first was the photographer letting us do a silly picture. I don’t believe we will ever see it or it will ever see the light of day but I am hoping it does.

Later Thursday I participated in the Planning and Development meeting. There was only one item which was about the 2003 agreement with St. Charles Place for road widening.  Currently, the terms of the agreement are ten years. The applicant requested a ten year extension.  Staff and the committee recommended extending the certificate of offset for five years.

Christmas Events and the Skittles Incident

Saturday afternoon I had the joy of riding in the Cary Jaycees Christmas parade. I rode along with council members Smith and Adcock. It was a lot of fun and I threw out lots of candy. My apologies go out to Cary Citizen editor Hal Goodtree who I hit in the head with a packet of skittles while he was taking a picture. Sorry about that Hal!

Saturday night I had the privilege of participating in the first, of what I hope are many, tree lighting at the New Waverly Place. It was very well attended with lots of families. The biggest draws were the snow with sledding and Santa Claus himself. The new owner of the shopping center promises several new stores and restaurants in January. I can’t wait!

Cary Cop Tony Menendez is Employee of the Year

In news from staff this week, Tony Menendez was named Employee of the Year. Tony is a senior police officer and was chosen out of 25 nominees from nearly 1,200 employees. He was honored with a plaque and will receive a $1,000 savings bond. The council will recognize him at the December 15th regular meeting.

In other news the Senior Center will close from December 19, 2011 through January 15, 2012 while crews upgrade the building’s heating and air. This is good news for most of the program participants who have complained about temperatures for years. Most of the programs will continue as scheduled in other Town facilities. During the closure, Cary Senior Center administration, including C-Tran services, will operate out of Jordan Hall, on Harrison Avenue. Staff will contact participants with adjusted program location information.

Staff released a list of current projects this week. These can be viewed at:

Some of the most recent submittals include a Walgreens at Waverly Place, Phase 2 development at Weatherstone Springs, 51 single family homes in the Westvale subdivision off of Green Hope School Road, and 206 apartments at Tryon Road and Cary Parkway.

Wake County has provided an overview of the draft Transit Plan on its website at http://www.wakegov.com/transportation/transitplan.htm. This page, which is a brief overview, has links the entire plan, the executive summary and the appendixes. The council will review this topic at its January 3rd work session.

Third Safest in the Nation

Cary was named the third safest in the nation among municipalities with populations of 100,000 to 499,999 by CQ Press.

Cary keeps its status as the highest-ranked municipality in North Carolina and in the southeast among the nation’s safest cities overall.

This year, Cary ranked 11th safest overall when compared with every community of any size in the report. The rankings are based on final 2010 crime statistics. To see the rankings of all cities go to http://os.cqpress.com/citycrime/2011/City_Lo-Hi_2011.pdf. You will notice the next closest city to Cary is Raleigh at 164.

This coming week will be a full week for me with the highlight being the beginning of my second term.

Well that is all for this week. My next post will be on Sunday, December 18th. Please feel free to email me with a comment. Email all Town of Cary questions or comments to Harold.Weinbrecht@townofcary.org. Email personal comments to augustanat@mindspring.com.