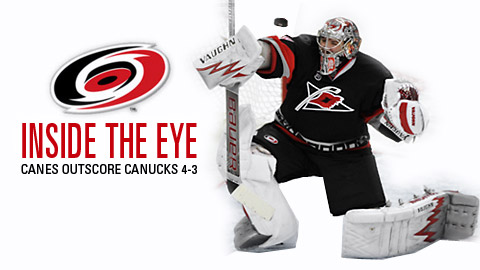 Cary-lina, NC – Drayson Bowman scored 2 goals leading the Carolina Hurricanes in scoring over the high-powered Vancouver Canucks by 4-3 at the RBC Center (soon to be PNC Arena) on Thursday, December 15, 2011.

The Stars Out Tonight

The Canes were without Jeff Skinner and Joni Pitkanen as both have concussions.  Skinner leads the Canes in scoring, 12 goal, 12 assists, and Pitkanen is among the league leaders for ice time.  Both are having excellent years, despite the Canes’ yucky record.

The game started out slow with both teams having a one shot and done offense. Chad LaRose mishandled the puck in a defensive corner allowing the Canucks to gain control.  Chris Higgins eventually took the puck half way up the boards, made a long cross ice pass to Kevin Bieksa on the left point who had a one timer slap shot. With traffic at the crease, Cam Ward didn’t have a chance.  After the goal, LaRose held his stick horizontal accidentally cross checking Bieksa that set the tone for the period.

A few minutes later after an excellent turnaround shot by Bowman that was saved by Cory Schneider, everyone paired off with the main bout between Bryan Allen and Aaron Rome, getting the crowd into the game.  Honest decision: Allen got the better of Rome.   There was so much confusion about who was getting a penalty, nearly everyone went to the box only to have the ref issue free passes.   The Canes had 3 power plays in the period.  No question there is improved Canes movement on the power play, more shots and more scoring chances but they need more than looking good.  They need to score.

Early in the second period the Canes had another power play.  Passing was great and Schneider made some excellent saves.  Just before the power play ended, Tim Brent got caught for holding.  The Canucks have the top power play in the NHL but the Canes penalty kill unit did a tremendous job.  Brandon Sutter, who has great games and good games – never a bad game – made a key sliding block during the kill. Former Cane Andre Alberts made a nice pass up ice to Ryan Kesler who touched the puck to Chris Higgins.  Higgins went in on Ward untouched but Ward made one of several unbelievable saves on the rush. 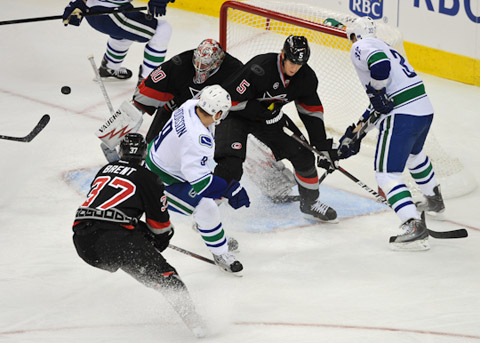 After the next face off, Henrik Sedin did his impression of Wayne Gretzky and held the puck behind Ward’s net.  Somehow he found Mason Raymond cutting towards the net and made a perfect pass for a 2-0 Canuck lead.

When the Canes recognized the guests in the military suite during a TV timeout it was moving that nearly all of the Canucks on the bench stood and slapped their sticks on the boards which is a hockey expression of applauding.

Anthony Stewart used his strength and won a battle in the Canuck’s corner.  He made a good crisp pass to the front of the net with Bowman and Eric Staal well positioned with Bowman making a perfect tip in. 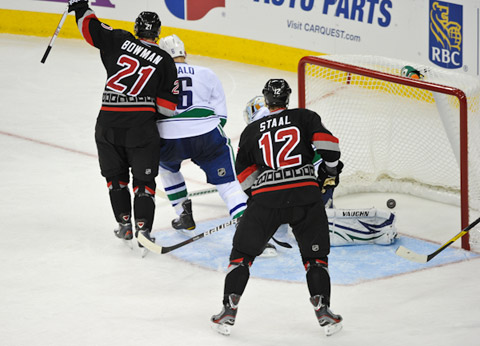 Two shifts later, the line of Jussi Jokenin, Alexei Ponikarovsky and Tuomo Ruutu frustrated the Canucks with their forechecking, size and skill.  Jokenin got the puck to Allen at the left point who unloaded a cannon of a shot that Ruutu’s stick redirected into the net as he was parked deep in the slot to tie the game at 2-2.  That goal, and the aggressive play by the Canes, really got the crowd into the game.

On the Canes first possession in the Canuck’s end in the third, Sutter made a smart play in the defensive zone that got the puck up ice.  LaRose picked up the puck and made a gutsy pass cross ice to Bowman all alone at the top of the left face off circle.  Bowman settled the puck to his forearm and made a beautiful shot from 20’ out to give the Canes their first lead of the game.

Three minutes later, Bowman used his speed to create a solo breakaway, made a good move with a back handed shot only to have Schneider make a better save.  After Keith Ballard got called for holding Ponikarovsky, the Canes power play went aggressive.  They got off several shots, held the puck in the zone very well then Burrows got called for slashing. 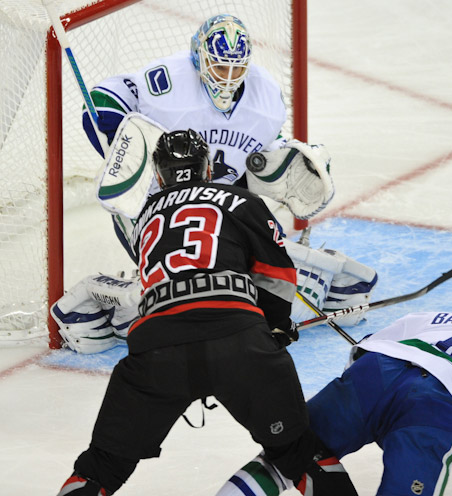 With Ward off for the extra skater, Ruutu found newly acquired Cane Jaroslav Spacek high in the slot for a one timer slap shot that put the Canes a commanding 4-2 lead.

Roar of the Canes Crowd 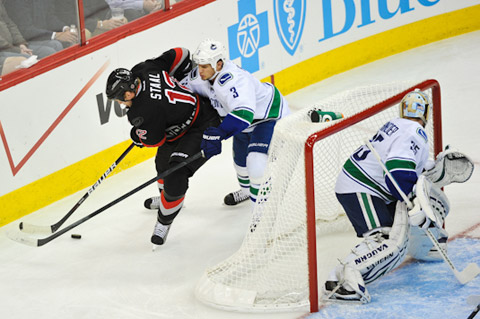 The Canucks are a very good team and wouldn’t easily fold.  Sedin had the puck at the blue line and again patiently waited for a crowd to form in front of Ward.  It did, he shot, Ward made the initial save but the defense didn’t clear out Burrows who had an easy goal on the rebound. Here’s shocker: LaRose must have made a comment (other than “Hey pal, wanna have a beer after the game?” to Burrows).

They did the old hockey man-hug and both were sent off for roughing.  On the ensuing 4 on 4, Ward made what will be the NHL #1 save of the week when he robbed Ballard of a sure goal into an open net.  With about 30 seconds left, the were Canes still putting pressure on the Canucks goal. After the ref blew his whistle, Bieska cross-checked Ruutu in the face right in front of the ref.  No penalty was called but I’m sure the NHL will be reviewing that hit.  It was dirty, certainly intentional and uncalled for, with a suspension and fine at the least. 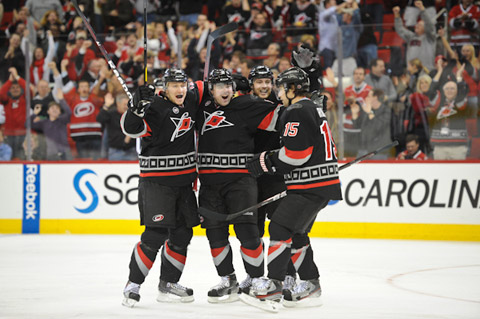