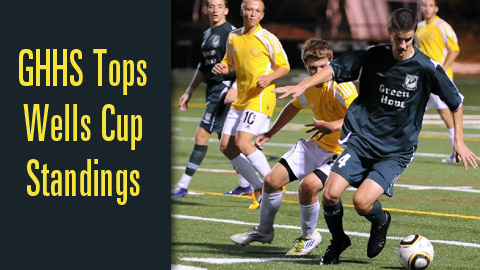 Cary, NC – The fall sports season has been put to rest, and the tally of points is in. Cary’s Green Hope High School, 2 time Wachovia Cup winner, is on top for a third year in a row in 4A competition in the newly-renamed Wells Fargo cup.

Green Hope clinched state championships in men’s soccer, women’s cross country, and a top four finish in women’s volleyball racking up 195 points to put them safely ahead by 25 points of #2 Broughton.

Raleigh’s Athens Drive High School is the only other Wake County Public School to make the top 15. Myers Park who has placed second to GHHS for 2 years, and who won the cup for 2 years previously is in 3rd with 165 points.

Gibbons On Top in 3A

Another local favorite, Raleigh’s Cardinal Gibbons High School, is way on top in the 3A classification with 347.5 points.

In 3A competition, the story has been all about Gibbons which dominated in all 7 fall sports. Crusader teams earned five different state championships: volleyball, women’s tennis, both women’s and men’s cross country and men’s soccer.

The Wells Fargo Cup, formerly known as the Wachovia Cup, is sponsored by Wells Fargo and the NCHSAA. The award recognizes the high schools that achieve the best overall interscholastic athletic performance within each of the state’s four competitive classifications. The Cup program is in its 33rd year.

Here’s the official list of standings. Where a ranking isn’t indicated, teams are in a tie.

Points are awarded for all sports as follows: 50 for first, 45 for second, 40 for third, 35 for fourth, 30 for fifth, 25 for sixth, 20 for seventh and 15 for eighth. In the event of a tie, the schools receive an equal number of points based on the number of teams that tie and the number of teams that finish higher in the standings. Five points are awarded for each sanctioned sport in which a school competes.

Wells Fargo Cup standings are announced three times each school year: once after the fall, again after the winter sports, and then concluding with the winner after the spring sports season ends in June. The engraved silver cups are presented during NCHSAA Day activities at UNC-Chapel Hill each fall.

Inside the Eye: Canes Outscore Canucks 4-3