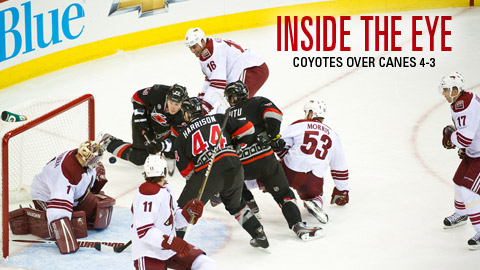 Cary, NC – This one hurt. The Canes were up 3-1, wildly outshooting the Coyotes before eventually falling to the visitors 4-3. Another third period with mental and physical breakdowns and a lack of defensive coverage.

It was good to see former Cane Ray Whitney seek out Eric Staal during the warm-ups at center ice for a few friendly words. The NHL frowns upon opposing teams talking with each other before games as it’s a tough area to monitor – not all conversations are friendly.

With officials not paying attention and everyone from both teams on the ice, there’s been a time or two in the past that fans got their money’s worth before the first puck was dropped. 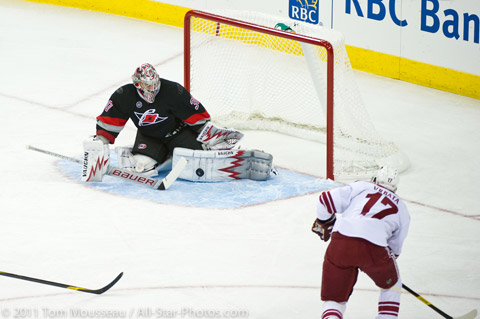 Jay Harrison, after missing several games with an injury, was back in the lineup banging bodies but went a bit too far by holding a Coyote during a clear by the Canes. The Coyote’s power play is nothing to write home about as their first unit worked too hard for that perfect shot.  Unfortunately their second unit included Whitney who needed all of 4 seconds to score from 35 feet out on a shot with Cam Ward totally screened.

Later the Canes carried the puck nicely into the offensive zone but Derek Morris was called for interference.  The Canes power play really looked good with the obvious word to shoot high on Jason LaBarbera.  Just as the power play ended, Jussi Jokinen had an excellent pass to Alexei Ponikarvosky in the slot.   Poni’s shot was blocked but Tuomo Ruutu was quick gathering the puck for a goal scorers reflex shot into the net.  Late in the period, the Canes were pressuring when Boyd Gordon hooked Staal while cutting to the net.  The movement, both with skaters and passing was impressive but the Canes couldn’t capitalize on the man advantage.  Shots after 1: Canes 14 Coyotes 8 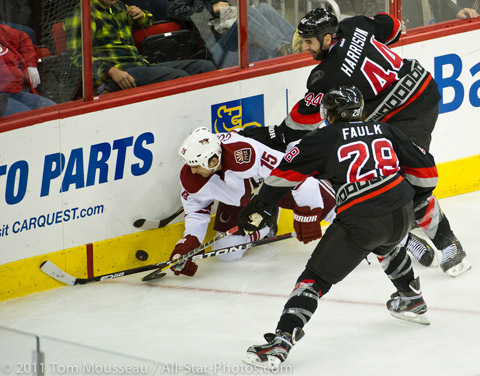 Nodl Scores His First as a Cane

Like life in general, it’s the little things that sometimes go unnoticed but do the most good.

Early in the second, the Coyotes had control in the Canes’ end.  Pat Dwyer stole the puck up high and was able to clear the puck with a sweet back hand pass between 2 Coyotes off the boards to himself to start a rush up ice.  The fourth line of Andres Nodl, Anthony Stewart and Riley Nash were dominating play in the Coyotes’ zone. Jaroslav Spacek shot the puck off the glass in the corner with the odd rebound coming out to a perfectly positioned Nodl who snapped it over the shoulder of LaBarbera from 12 feet out.  A few minutes later Poni got tripped on a dumb play by Morris.  The Canes power play was as pretty as a Christmas present but like the present from Aunt Bertha, wasn’t what you wanted as they didn’t score.

During the power play, the fans gave an ovation for the effort as they kept the puck in the Coyotes end for nearly the entire power play.  On a rush with all 3 forwards skating in textbook formation, Jiri Tlusty centered the puck from the left boards as if he meant it.  LaBarbera tried to scoop up the puck but got distracted with Dwyer crashing the net and the puck bounced off the glove into the goal.  Tlusty was having a good game so call that a goal well deserved.  On only the Coyotes second shot of the period, with the Canes in another defensive lapse, Cal O’Reilly put one high glove side on Ward to cut the lead 3-2.  Being a Whitney fan, I couldn’t help but follow him on the ice.  A few observations of a real pro: his head is on a swivel, he still has a very quick stick, he is always moving to an open area, keeps the puck within 12 inches of his stick, and has respect for every player on the ice.  Best Whitney memory besides his famous yell after holding the Stanley Cup, was him skating up ice through the entire opposing team, passing off to an open Brandon Sutter for an easy tip in.  Sutter went to the bench saying “wow” about 10 times. Shots after 2: Canes 26 Coyotes 14 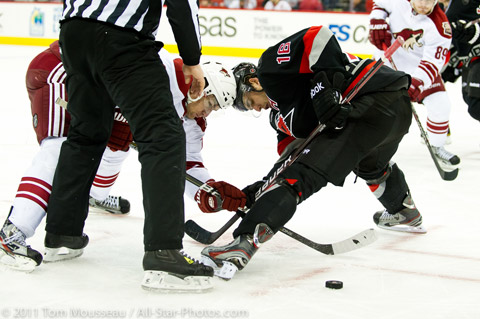 I’d Rather Have Coal In My Stocking

Both teams came out flying in the third with speed and shots the mandate from both coaches.  Everyone in the building thought Dwyer had a goal after Sutter brought the puck in on the left wing then made a beautiful leading pass to Dwyer for a tip in only to have LaBarbera guess right with a lunging pad save.

The game lacked hard checks although the official scorer had the Canes with a generous 13 and the Coyotes 7 after 2 periods.  He had to be watching a different game.   On yet another defensive lapse, Lauri Korpikoski skated untouched behind Ward then made a centering pass to defenseman Rostislav Klesla waltzing down on Ward for an easy goal .

With all the line shuffling, one of the Canes’ coaches needs to look at who is on ice so frequently when goals are scored or why men are so open.  There’s certainly a trend I see and that needs to be addressed.  The NHL has a trade freeze until Dec 27th so we’ll see what Santa brings after then, as some players need an awakening. 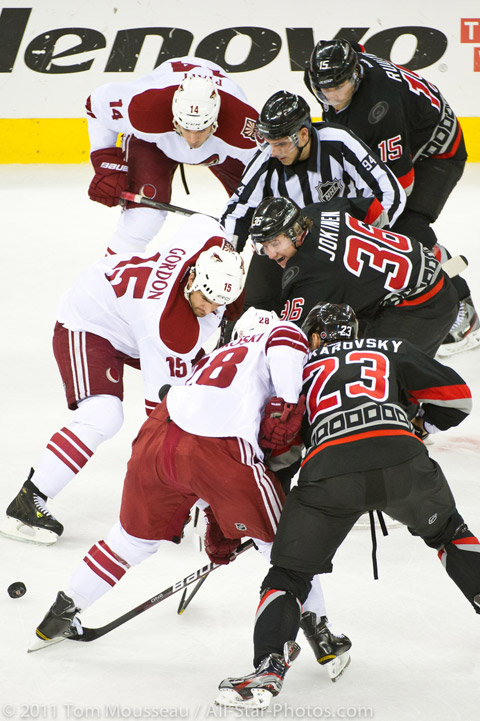 How About a Helping Hand?

After a cross check by Jokinen and a slash by Martin Hanzal, the teams played a 4 on 4.  With Whitney in control, it took Phoenix less than 20 seconds to score for a very disappointing 4-3 Coyote lead.  Korpikoski scored when he was allowed to stand in front of  Ward unchecked.  That just can’t happen.

Ward is really a phenomenal goalie.  No team should be able to score 4 goals on just 19 shots against him.  He needs support and opposing forwards need to pay the price for being in front.   Shot totals: Canes 37 Coyotes 19 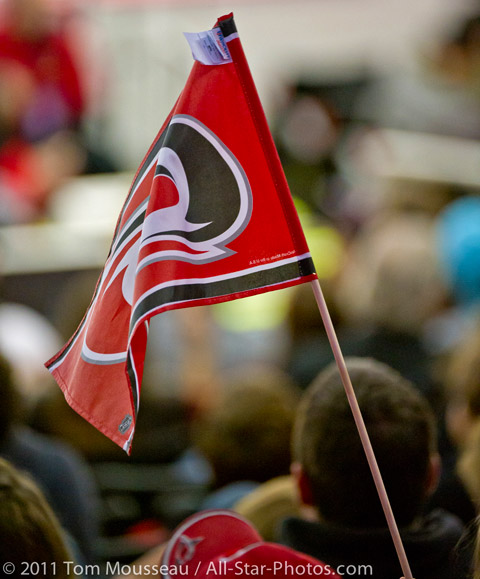