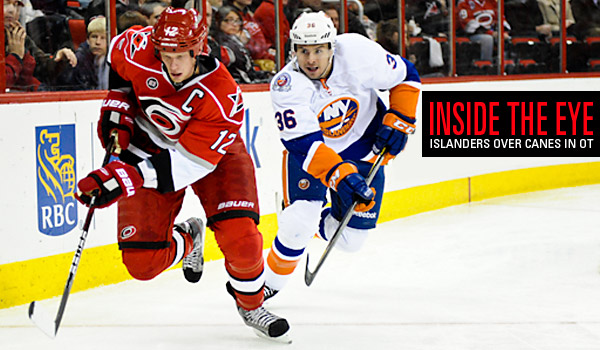 The game was a battle of the basement as both team had a conference low of 32 points but the Canes have played 4 more games.

All Star John Tavares was behind the net and fed an open Matt Moulson in the slot for a one timer to the stick side of Cam Ward.  The Canes responded very quickly at the other end.  Tim Brent won a face off back to Andreas Nodl.  Nodl passed to Jay Harrison who made a hard pass to Anthony Stweart in the high slot.  Stewart had a tip in from about 20’ out changing the direction of te puck that didn’t allow Evgeni Nabokov time to react.   Late in the period the Isles kept the puck in the Canes end for about 2 minutes as the Canes couldn’t get the right line match up.  Brandon Sutter’s line was the checking line again and needed to go up against Tavares’ line.  Bryan Allen is a formidable force on the ice as he was able to manhandle any Isle forward at any time.  Every time the whistle blew in the Canes end, if there was an Islander laying on the ice, Allen was innocently standing nearby.  Shots after 1: Canes 17, Islanders 13 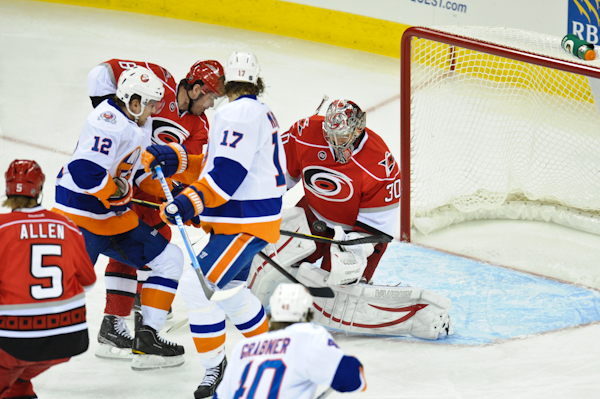 Early in the second after a weak clear by the Islanders,   Harrison dumped the puck to the far corner . With the puck running along the boards, Nabokov went behind the net to stop the puck but didn’t count on Drayson Bowman’s speed.  Bowman tangled with Nabokov and Andrew MacDonald, winning the puck for a pass out in front of the goal.  Sutter was in perfect position for a wrist shot to give the Canes a 2-1 lead.  Sutter has good games and great games but never a bad game so having him score after hard work by a line mate was good to see. The rest of the period was sloppy on both ends with rarely a good shot by either team.   If there was a good shot, both goalies were making quick glove saves to freeze play.   Eric Staal, while not factoring in the scoring, had an excellent game on both offense and defense. Shots after 2: Canes 27 , Islanders 19 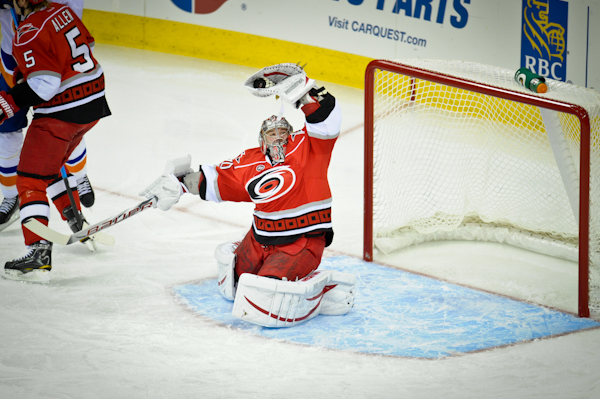 Islanders Go 2 For 2 on the Power Play

With Tuomo Ruutu in the box for high sticking, the Islanders power play was on the ice again. After a shot from the left point by Mark Streit that went very wide to the left of the net, Frans Nielsen was aone on the right side for an easy open net goal.  It appears coach Kirk Muller has a reward system for players.  If they skate hard on their shifts, they get more ice time.  If they don’t or have a costly error, they sit.  Ruutu is a skilled player who is constantly checking opposing players into the boards with meaning, digging the puck out of the corners, paying the price in front of the goal or shooting.  In my opinion, that penalty kept him off the ice in overtime and in the shootout.

Later in the period, with the puck deep in the Islanders end,  after a scrum between Sutter and Brian Rolston and Travis Hamonic, Chad LaRose picked up the puck behind the goal, made a good move to the net and shot along the ice to the far side for a 3-2 Cane lead.  The Canes didn’t have the killer instinct and the Islanders had the puck deep into the Canes end with a minute and a half left. Exactly like the Stewart to Bowman goal a few games ago, on nearly the exact same spot, the same play occurred when Tavares passed to Kyle Okposo right in front of the goal to tie it up 3-3.  Shots after 3: Canes 37, Islanders 30 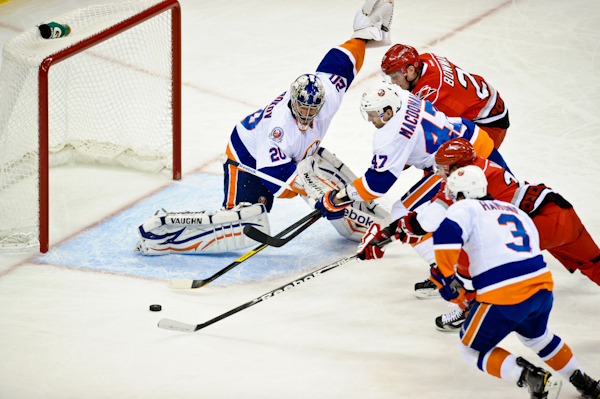 The overtime period had the Islanders taking 6 shots to the Canes’ 3.

Remember my comment about a possible reward system? That seemed to be a factor in both the overtime and eventual shootout.   I didn’t see where Ruutu had any ice time in the overtime nor a couple of other stronger players who might have been able to thwart some of the dominance the Islanders showed during the overtime.   The game went to a shootout with the Islanders scoring 2 to the Canes 1.

Win or lose, I’m not a fan of shootouts.

More pictures from the game by Suzie Wolf for CaryCitizen. 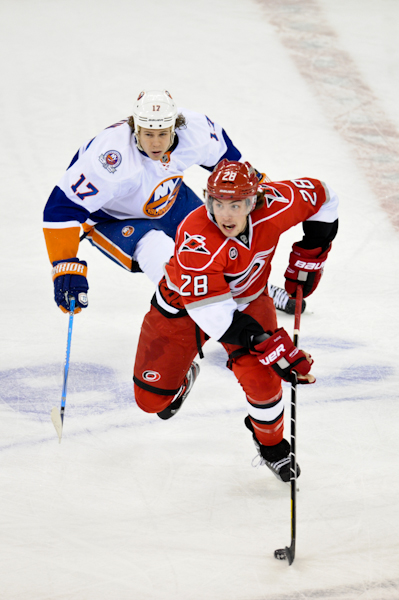 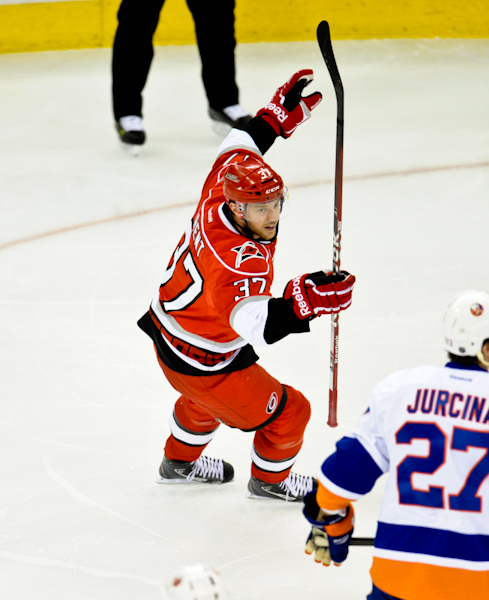 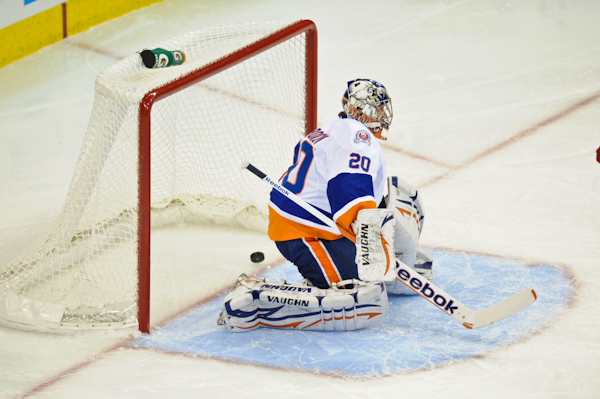 Health: Should I Be Worried About Low-T?