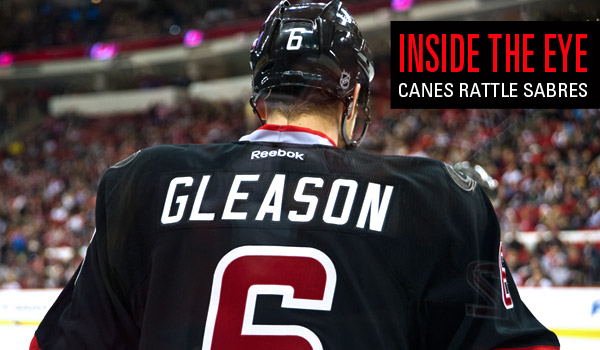 Cary-lina, NC – The Carolina Hurricanes beat the Buffalo Sabres 4-2 behind Eric Staal’s goal and 2 assists in a loud RBC Arena on January 6, 2012.

These two teams always have great games against each other with the teams splitting the two previous meetings this season.  Coach Kirk Muller made a major change for the Staal line putting Jussi Jokinen and Tuomo Ruutu as wingers with Staal.  The second line remained the same with Brandon Sutter, Drayson Bowman and Chad LaRose.  Third line was Tim Brent, Alexei Ponikarovsky and Andreas Nodl and Jiri Tlusty, Anthony Stewart and call up Brett Sutter on the fourth.

The game was billed as a top goalie match-up and both Cam Ward and Ryan Miller didn’t let anyone down as both made several key saves, some unbelievable.  The Staal line generated plenty of offense and the puck was certainly in the Sabres end more when they were on the ice.  The entire defensive corps did an excellent job keeping the lanes clear for Ward to see the puck and sending rebounds safely to the side boards. Late in the period, the Brent line had a great shift keeping the puck in the Sabres end for their entire shift getting off several shots and frustrating the heck out of the Sabres. No scoring in the first and no penalties but a very exciting period of good hockey to watch.  Shots after 1: Canes 15; Sabres 12

Sabre Mike Weber was called for high sticking Brett Sutter early in the second. While Sutter took exception and wanted to have a go at Weber, his team mates had to tell him a power play was better than playing 4 on 4.  And right they were as Staal won the initial face off with Jokinen picking up the puck.  Jussi skated to a clearing then passed over to Justin Faulk on the left point.  Faulk took a few strides to the center then let go a hard shot with both Staal and Ruutu well positioned in front, not allowing Miller time to react as the puck found the back of the net.  Just 21 seconds later the Sabres tied it up on what appeared to be a missed assignment when Thomas Vanek was left all alone on Ward’s right post.  The Canes defensemen had the crease covered so to me, it looked like they needed a forward down low for help in the coverage. The Canes had another power play that again looked better than the past few games even though they didn’t score.  At the end of the period, the Tlusty line made every opportunity of their ice time forechecking well in their offensive zone as the puck never crossed the blue line. Shots after 2: Canes 23, Sabres 21

Staal’s line first shift in the third was again full of energy, speed, skill and with Ruutu, body slamming.  On their second rush, Gleason sent the puck wide to the right of Miller hitting Ruutu’s stick.  The puck careened off the back boards to Staal.  Staal collected the puck on his back hand, quickly to his forehand while on a strong move to the net, he then banked the puck off Miller into the net.  A few minutes later, on a soft play deep in the Canes end, Jamie McBain and Jason Pominville tangled for the puck. Pominville pushed the puck toward the goal with the puck bouncing off Ward’s left skate into the net.   On a strange play that must have been a ‘I’ll make up for that later in the game’ play, Jokinen and Nathan Gerbe went at each other along the boards near the penalty box.  Uncharacteristic for both players and they’re both class, skilled players.  On the subsequent 4 on 4, LaRose picked up the puck at the Canes blue line quickly going up the right wing. Brandon Sutter and Tim Gleason read the play extremely well for an odd man rush.  Sutter put on his jets with Gleason wisely and his defensive nature settling in at the blue line.  With Sutter going wide in text book fashion, LaRose kept the puck, releasing it at the right moment and shooting it to the long side of Miller to give the Canes their third lead of the game. With just under 4 minutes to go, Faulk got called for the softest cross check in the entire NHL this season.  Jay Harrison had another solid game and with 2 minutes to go, got high sticked, cancelling the Sabres man advantage. When Faulk came back on the ice, the Canes had a power play.  Staal stole the puck just inside the Canes blue line, passed to Sutter in stride for the clear.  Sutter crossed the red line up to the right side of the Sabres blue line.  His eyes got as big as golf balls seeing the empty net and somehow got off a shot as he was being hooked down to the ice.  How sweet it was seeing that puck glide into the net with the Caniacs living up to their reputation of the loudest house in the NHL.

This was a great game to attend.  Large crowd and it was good to see the woman in section 323 in the Sabres sweater again.  First saw her in ‘Movember’ when folks in the NHL grew facial hair in support of men’s health awareness.  Her goatee looked great.  Shot totals: Canes 35, Sabres 33