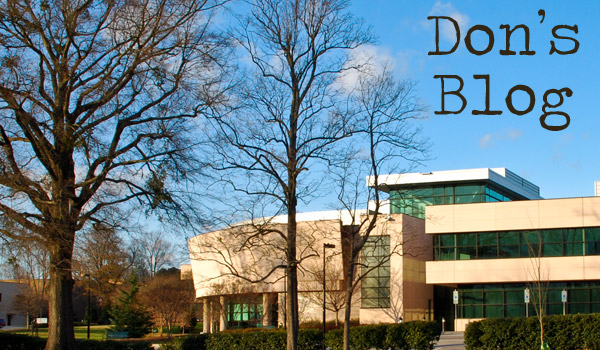 Editor’s Note:  Cary Town Council Member Don Frantz has been keeping a blog since 2008. It is with great pleasure that we announce that Don has given us permission to republish his posts and see how it goes.

Don Frantz is a great blogger – you can really hear his voice in what he writes. He’s very informed on the issues, but keeps it simple. He follows an informal publishing schedule – when he’s got something to say, he writes a post.

Don speaks his mind, even if it puts him in the opposition on some issues. But he does it in a way that’s principled and without intentionally ruffling anyone’s feathers. That’s why we respect his blog and asked him to let us republish it here.

This post is from late December. But it gives some good insight into the intellectual conversation happening right now in Town Council.

Cary, NC, December 18, 2011 – With the holidays, the last couple of weeks have been relatively light in regards to council responsibilities while heavy on the fun and festivities! The only downside is that with so many holiday events, you just can’t make them all. Highlights for me were the Heart of Cary Association’s Ole Time Winter Festival, the town’s Christmas Tree Lighting Ceremony and the Cary Jaycees Christmas Parade. Congratulations and Thank You to all the volunteers and town employees who worked so hard to make all of these events a huge success! And thanks to the man upstairs for the great weather!

And while we’ve had a lot of fun, we did have some work to do.

The meeting began with the swearing in ceremonies for Mayor Weinbrecht and Council Members Adcock, Bush and I. After we were sworn into office, the first order of business was to elect a Mayor Pro-Tem. Congratulations to Cary’s new Mayor Pro-Tem Gale Adcock! I am confident she will be a great ambassador and represent Cary’s interests well.

Following the election of Mayor Pro-Tem, Mayor Weinbrecht announced the new committee assignments for council members. The list is long and boring so I will let the Mayor post it on his blog. ;-) I will say that I (finally) get to Chair the Planning and Development Committee and I remain the liaison for the Parks, Recreation and Cultural Resources (PRCR) advisory board and the Town Center Review Commission (TCRC).

• C-Tran fare increases and changes. Changes include the elimination of free transfers – this is consistent with both CAT and DATA, modifying the current bus pass structure, and allows for seniors and children to now ride fixed route for free, but remember, ID is required (just not to vote). You can view a complete list of changeshere. The council unanimously approved the amendments.

• Land Development Ordinance Amendments regarding telecommunications towers (cell towers). Proposed amendments provide incentives to telecommunications providers to utilize stealth technology – hopefully resulting in fewer ugly cell towers throughout Cary. The incentive is basically an administrative review and approval process vs. the current costly, time consuming council approval process. If a proposed cell tower is NOT of stealth design, it must still come through the council…and considering previous council decisions…well…good luck with that. The proposed amendments now go to our Planning and Zoning Board for review.

• Site Plan for the old Austin Foods site in Downtown (at the E. Durham Road/E. Chatham Street Intersection) Basically the applicant wants to take an old, ugly, environmentally contaminated site and make improvements that will not only allow for re-use of the existing structures and improve aesthetics downtown, but also better protects our environment and reduce stormwater runoff. The council unanimously approved the request.

• A request from Councilmember Adcock and Mayor Weinbrecht to direct staff to investigate and report back to council the pros and cons of amending our ordinances to restrict or eliminate the tethering of dogs in Cary. This request passed unanimously.

• A request from Mayor Weinbrecht and I to direct staff to investigate the pros and cons of implementing a trap, neuter and release (TNR) program in Cary to reduce the number of feral cats in Cary. This request also passed unanimously.

• A request from Council member Bush and Mayor Weinbrecht to direct staff to investigate suggested actions the town may take in regards to hydraulic fracturing (AKA fracking) in town limits or Cary’s extra territorial jurisdiction (ETJ). This request passed 5-2. Both I and Councilman Smith voted “no”.

I opposed the request because:

From the discussion at our meeting it is obvious that no one has a clear understanding of what fracking really is, or what the impacts to our community may or may not be; and given the amount of media sensationalism and special interest spin on both sides of this topic, I don’t know that we could ever get the truth.

But the reality is that even if state law is changed to allow fracking, it’s probably not going to occur in Cary (zoning, property values etc..), so trying to ban it really doesn’t do anything to address any concerns we might have. If anything we should be more concerned with what might occur in neighboring jurisdictions – especially those near Jordan Lake – our water source.

If the state legislature is going to allow fracking in NC, then it makes more sense that we work with our law makers to ensure that whatever legislation is passed provides for the highest environmental protections, best management practices and transparency as possible so that regardless of where any drilling/fracking occurs, all of NC is protected.

We cannot ignore the potential economic impact of drilling in North Carolina, nor can we ignore the potential environmental impacts. Fracking has worked well for many communities across America while others have concerns. Let’s learn from the success and failure of others and see if we can find something that works for us.

Following our council meeting we held a closed session to discuss a number of legal matters, none of which I can tell you about. Confidential, sorry.

Our December Planning and Development Committee meeting lasted a whopping three minutes. We had only one agenda item for discussion that was a no-brainer. I also met with Town Manager, Ben Shivar to discuss a few items.

That’s about it for this post. I hope all of you have a very Merry Christmas and Happy Holiday Season and have a Happy and Safe New Year!