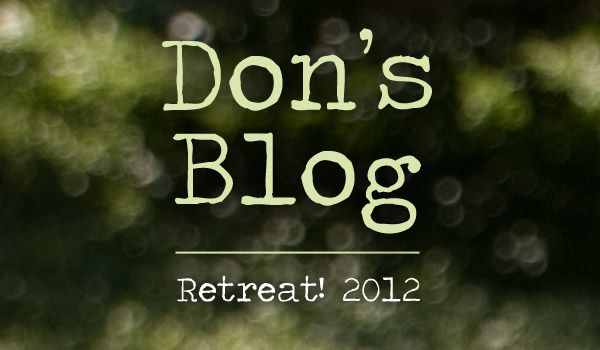 Thursday afternoon I headed to Wilmington for our annual council/staff retreat. While we have typically stayed in town for our retreats to better encourage citizen attendance and reduce costs, the conveniences of being in town proved too much of a distraction for some. Two years ago one council member actually left our retreat so they could attend another meeting for three hours! We decided the best way to eliminate the distractions was to head out of town.
Council members met Thursday evening for dinner and social. This was a great opportunity to get to know each other better outside of town hall – especially newly elected council member Lori Bush. We had a great time and learned a few things about each other we didn’t already know. Council member Julie Robison did not attend our retreat.

The retreat began Friday morning with a session on how to be an effective council. We mainly discussed how council members expect to work with one another; respect differing viewpoints, agree to disagree, stuff like that; stuff we already know and do. We did however learn a few things about each other that we didn’t already know. For instance, did you know we have a “Doobie” and a “Wino” on the council??? ;-)

Next was a session on the Land Use Plan update. Cary will be revisiting our land use plan and our staff was looking for direction on how the council wishes to proceed. We broke out into smaller groups and brainstormed key points we want the new plan to address. Some of the more popular suggestions included:

There will be a number of community meetings and worksessions as this goes through the process. I encourage you to get involved and offer your vision for the future of Cary. This is your town after all.

The next session dealt with intergovernmental effectiveness; how to better work with other local, state and federal elected officials. So much of what Cary can or can’t do is determined by others – especially our state and federal officials and we need to do a better job of communicating to them issues impacting our community. We heard from Jack Cozort, Cary’s state legislative consultant, Paul Meyer from the North Carolina League of Municipalities, and Roger Gwinn and Leslie Mozingo from the Ferguson Group, our Federal legislative consultants. “Consultant” in this case really means lobbyist. Yes, Cary has lobbyists and while they do a great job for us, there is no substitute for one on one elected official to elected official communication.

We will work to better communicate with our state and federal officials and staff will do a better job of keeping us informed of issues that require our involvement.

Afterwards we broke for dinner and social, and yes we all paid for our own bar tabs. ;-)

Saturday morning began with a session on customer service. While I think most everyone would agree that Cary provides exceptional customer service, we can always do better. We discussed a number of areas for improvement, and ways in which to accomplish that. For years Cary has had a reputation as a difficult place to do business, and while we have worked very hard to make Cary a more business friendly community, we still periodically hear complaints from business owners about issues with permitting and inspections. We will continue to look for ways in which we can better serve Cary customers.

Next we discussed general capital projects and funding. The economic recession has significantly impacted Cary’s revenues, and while the council and staff have done a good job trimming the fat from our budgets and taking on no new debt, the “needs” list continues to grow. The bottom line is that there are more future needs and capital projects (fire stations in West Cary, parks and community centers, and transportation projects) than there is funding available.

We discussed a number of options:

The council chose to offer a new community bond to the voters this fall. The thinking was that economic times have changed tremendously since 2003, and that the voters should again decided if Cary is to take on any new debt. One thing citizens should be aware of is that “IF” voters approve the bond, they will also be voting for a tax increase.

Previous bonds were offered to citizens with the promise of no tax increase. This was possible due to Cary’s high growth rate; new revenues were able to cover the debt. That is no longer the case.

I cannot say at this time whether I support a new bond or not until see I see the list of capital projects proposed, how much they will cost and the impact on our tax rate. We will have a number of worksessions and community meetings as this moves through the process. I encourage all of you to get involved and offer your input.

Citizen’s Issue Review Commission (CIRC): This board was formed a couple of years ago with the intent of providing citizens an avenue to bring community issues to council. While the creation of CIRC was well intentioned, it has not worked out as we had hoped. This is mainly because there is a much easier way to get an item on council’s agenda – the pink slip process. It only takes two council members (a sponsor and co-sponsor) to get any item on the next council agenda. Why go through a long and bureaucratic process when all you need is the support of two council members and you’re on our agenda? Existing CIRC members also recognized this and stated that they do not find their board effective, nor do they find that it serves a purpose.

We will instead tap into these board members upon occasion when a specific issue arises that requires a citizen task force to better help us.

Town Center Review Commission (TCRC): The Town Center Review Commission serves as an advisory board to the Town Council for the review of subdivision plans, site plans, and variances within the Town Center Zoning District. In a nutshell, it serves as the Planning and Zoning Board for downtown. This board was created prior to the creation of Cary’s Downtown Development Department and the hiring of Downtown Development Director, Ed Gawf.

Existing board members expressed frustrations that their work duplicates that which town staff is already doing, there isn’t enough happening downtown to justify their existence and that their current mission is inadequate. I agree.

This board, like CIRC, was formed with good intentions. However, the reality is that they don’t do anything our Planning and Zoning Board couldn’t do and even adds another layer of government bureaucracy to the process.

We will call upon the existing board members to assist us with Cary’s land use plan rewrite and serve on future citizen task forces.

After a quick review of the retreat topics and action items we were out of there and headed back to Cary. I took Lisa and a few of the kids out to Chili’s…where we found that Mayor Wino…I mean Weinbrecht ;-) had the same idea. Too funny….

That’s the council retreat in blog form. Thanks for reading!