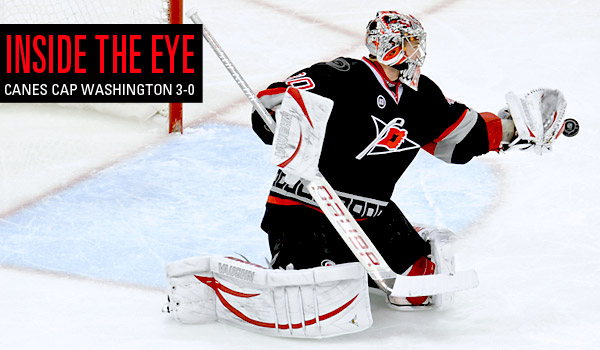 Story by Bob Fennel and photos by Suzie Wolf.

Cary-lina, NC – The Washington Capitals have owned the Carolina Hurricanes over the past two seasons with the Canes having only one win, in a shootout no less.  The teams played just 5 days ago with the Canes reeling off that loss as they felt they should have won. On Friday night at RBC Center, the Canes triumphed 3-0.

The Canes started off on fire as the first 5 minutes were played in the Caps end.  Turns out that would be a common theme as the Canes clearly had the majority of possession and counted on Ward whenever Washington got off a shot on a rare visit to the Canes end.  The Canes forechecking, stick positioning and hustle were noticeably better than the Capitals’. Only thing missing early on were quality shots and goals.

Derek Joslin and Matt Hendricks paired off in the Canes end sending both off for 5 minutes. The fight started well off the play and may have been a response to last Sunday’s game.

And who says hockey players forgive and forget? Justin Faulk got called for a trip that was well deserved.  It reminded me of my high school soccer coach: ‘if you miss the ball, get the ankle’. Faulk missed the puck but got both ankles.

The Caps power play is very good but the Canes penalty kill was up to the challenge. An absolutely great sweep check by Eric Staal, just inside the Caps blue line, allowed Staal with his long reach to shove the puck forward to Jussi Jokinen.

Jokinen skated past the trailing defenseman and put one home past Tomas Vokoun for the Canes 8th shorthanded goal of the season. Tuomo Ruutu, as always aggressive on the body checking, got his stick under a Caps’ visor for a 2 minute minor.

Staal again made a great steal after 5 swipes between 2 Caps in the Canes end. He got the puck up to Jiri Tlusty but the puck was bouncing and wouldn’t settle as he went to the net with Vokoun wisely smothered the puck. 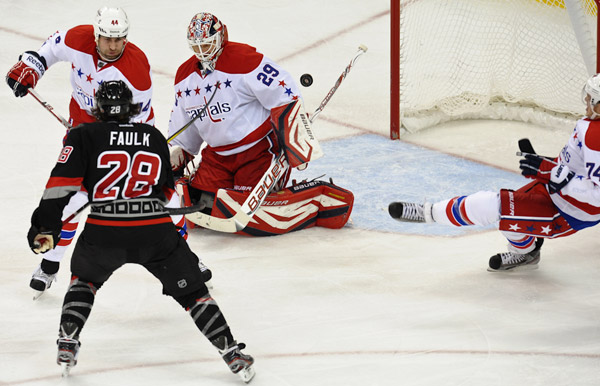 The Canes used 4 forwards and 1 defenseman for most of their first power play.  That type of line up is frequently used in the playoffs and when teams need goals.  The Canes have been trying that in practice and seeing it used at this point in the game was definitely different and good to see the Canes place more emphasis on special teams.  The Canes power play has been very good for about 3 weeks but no goal this time.

Cam Ward was very sharp in the first half of the second with several key pad saves and a couple of snow angels.  The Canes aggressive play lead to another power play late in the period. This time the Canes initially went traditional with 3 forwards but switched to 4 forwards when the second unit came out.

The passing was crisp with several shots.  Alexei Ponikarovsky brought the puck up the right side after a clear by the Caps. Tim Brent had the puck along the side boards passing out to Jay Harrison. Harry got off a wrister from the middle of the slot. Vokoun made a save off the blocker but couldn’t handle the puck in the air. Jokinen was camped out on front corner of the crease and had perfect timing as the puck hit the ice, he chipped it in for his second of the game.

One interesting point: the Caps did not have a shot in the last 14 minutes of the period.

The Caps came out in the third with their big guns putting 5 quick shots on goal, several not on goal too.  Ward was making save but giving up rebounds.  The defense did a good job of clearing the puck to the side boards or up ice as well as keeping the lanes open for Ward to get a good look. The forwards were forechecking up high keeping the puck harmlessly around the blue line.

The Canes didn’t change their game plan which was relentless forechecking and owning the neutral zone. Brandon Sutter took a very out of character hooking penalty.  I was watching Sutter up ice as his play is just so fundamentally sound and fun to observe.  I’m not sure the Caps appreciated his efforts as he was speared by one Cap and given a love tap in the back by another so this out of character hook was duly justified in my mind.

Late in the period, Washington pulled Vokoun for the extra skater.  Somehow they had 7 skaters on the ice with everyone on the Cap bench giving the ‘not us’ kind of look.  The Canes really didn’t want the whistle to blow as Jeff Skinner had possession of the puck with a wide open Jokenin who could have had the hat trick.

Staal won the next faceoff with the puck going in the Canes end.  Allen passed the puck behind Ward to Gleason in the other corner.  Gleason passed up to Staal who made a nice back-handed pass to Tlusty just outside the Caps blue line.  Tlusty made a power move down the right wing, cut across at the goal line straight for the goal.

Vokoun came out of the crease with his right leg in an obvious position to trip Tlusty, which he did.  After flying through the air, Tlusty hit the ice, kept his concentration solely on the puck and swept it in for a great looking and justified goal to the enjoyment of the nearly sellout crowd. 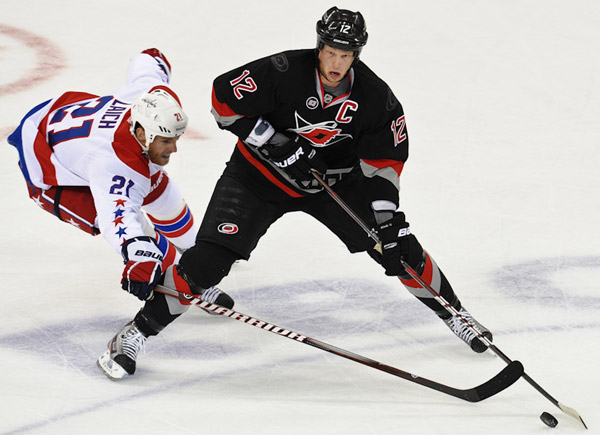 After the game Alexei Ponikarvosky was traded to the NJ Devils for defenseman Joe Sova and a 4th round 2012 draft pick.  My guess is the move was to free up forward space so folks from the Checkers can show what they’ve got.  The day before, the Canes and Florida exchanged 2 pair of minor leaguers.  I doubt, and hope, this isn’t the last of the moves.