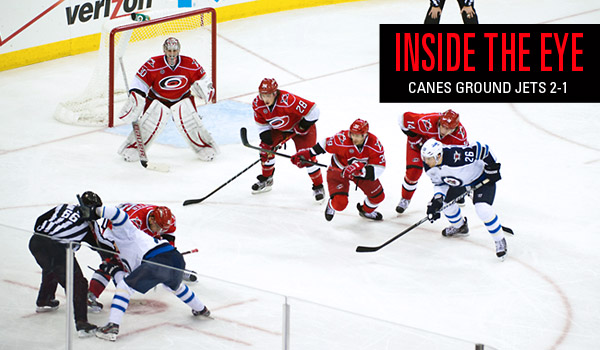 Story by Bob Fennel and photos by Tom Mousseau.

Cary-lina, NC – The Carolina Hurricanes finally got a win against the Winnipeg Jets this season in a 2-1 squeaker at the RBC Center, January 23, 2012.

The Canes had lost the previous 3 meetings but have an impressive overall all-time record against the Jets (Atlanta Thrasher) teams.  It was teacher appreciation night and the teachers came out in droves and were having a great time.

The first period started out with both teams playing cautiously with no one wanting to make that first mistake.  Tuomo Ruutu was called for boarding that was weak at best.  The Jets weren’t able to get any decent shots off as the penalty kill unit was very aggressive on the puck and played physical.

Shortly after the penalty ended, Cam Ward made two excellent saves, one was unbelievable as it was on a deflection from inside the crease.  After Ward made a save to the boards, Tim Gleason sent the puck up ice to Jeff Skinner.

Skinner went up the left wing with Zac Dalpe making a quick run up the right wing to allow for options as this turned into an odd man rush for the Canes.  Skinner had the option to shoot or pass, decided to pass but Ron Hainsey made a good initial block.  Fortunately for the Canes, the blocked pass resulted in the puck going back to Skinner, with Jets goalie Chris Mason going to his left to cover the intended shot from Dalpe, Skinner had an open net. The teachers would have liked that as that was text book, 2-on-1 hockey. 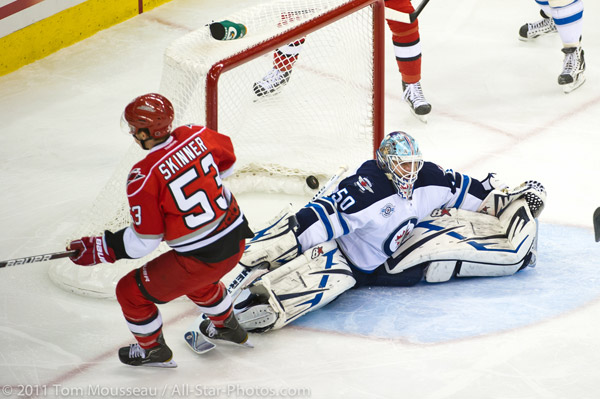 The Canes were making quality shots on the few they had in the first and eventually for the entire game.  About 5 minutes later, the Canes had the puck down low in the Jets zone.  Anthony Stewart used his strength to get the puck over to Tim Brent in the corner.  Brent made 2 good moves around Jets’ defensemen from the corner to the net. Chad LaRose had good positioning in front so Brent backhanded a pass with the puck bouncing off a Jets’ skate into the net. 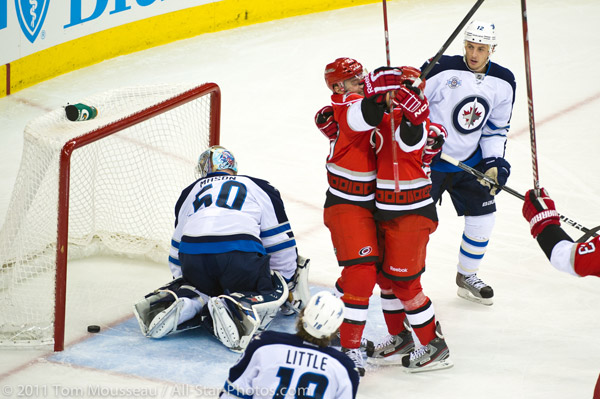 Midway through the second just as Skinner’s shift was ending and he was headed to the bench, the puck wound up on his stick with the lane to the goal wide open. His instincts went into gear and went to the net.  Just as the defense closed in, he slid a beautiful pass to Dalpe who just missed as Mason had a nice stick check.

LaRose was the recipient of what appeared to be a soft check along the boards in front of the penalty box area. At first it appeared he aggravated the injury that kept him out several games recently but it turned out he got a deep cut and was gone for the rest of the game.  Both Skinner  and Staal did a few double shifts to help out the rest of the game.

The Jets got on the board when Tobias Enstrom found Kyle Wellwood all alone in front of  Ward for what seemed to be the only defensive lapse all game. One error, one goal and that was all it took.   The Canes had another power play in the second but didn’t have any good scoring chances. Actually, the Jets had more opportunities while man down than the Canes had on the power play.

It’s a long time traveling from Winnipeg to Raleigh but the Jets looked like they had fresher legs in the third as it was all Jets.  Actually it turned out to be a goalie clinic as Ward made some superhuman saves. 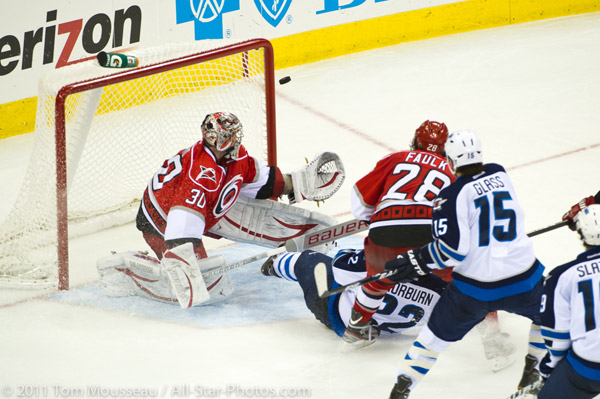 I appreciated the third as well as any fan. In this game the Canes treated me to a seat in section 216.  Little did I know that section would be full of teachers.

That section was livelier than usual with appreciative and even raucaus local educators.  Thank you Canes for supporting our teachers!

The Jets poured it on in the third with 14 shots on goal and more not on target.  Most were high shots or deflections.  Considering the amount of offensive time the Jets were in the Canes zone, both Ward and the defense has to be commended about their play.

Staal carried the puck from center ice into the Jets zone along the left wing.  With Pat Dwyer and Jussi Jokinen on the right drawing a crowd, Staal decided to shoot and hit the post.  It would have been a Jet back breaker if that went in.

A few moments later in the Canes end, Ron Hainsey took the puck from the right point, skated to the center of the blue line then sent one into traffic in front of Ward. Somehow the puck found the post but Ward covered up the puck in the crease.  With the Canes on a power play, Alexander Burmistrov made a good outside-in stick move between 2 Carolina defenders for a point blank shot on Ward but Ward again, made the stop.  With time quickly ending, Jiri Tlusty got called for tripping but because the Canes never touched the puck when time ran out, the penalty is only for the books. 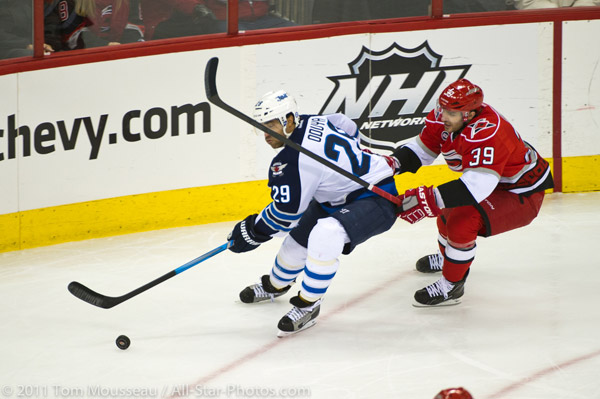 Food: Asian Markets In (and around) Cary NC