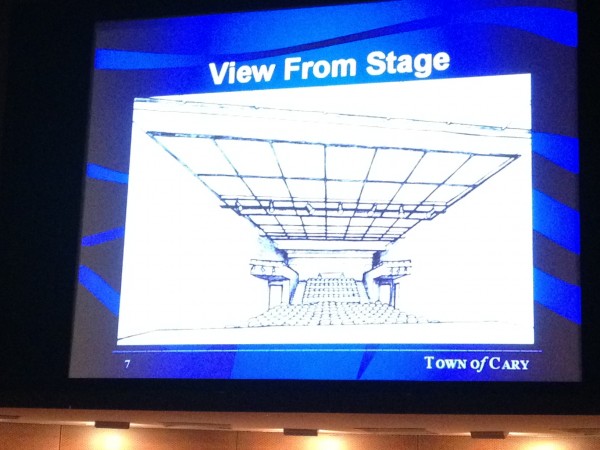 Cary, NC – With the discussion swirling around the marquee for the new theater, the Town held their second public information meeting about Downtown development to another packed house on January 31 in Council Chambers at Town Hall. It’s a grand plan, and here’s how it stands right now.

A quick recap of the earlier meeting (story) revealed concerns expressed by the public. They were:

The town planners have taken these concerns into consideration as they plan the theater and other Downtown improvements.

Ed noted the plans for the “The Cary” as the theater is being called, are about 35% done and that now is the time to be heard, as changes can still be made. He also emphasized that although the building is historic, this is not a restoration, but rather a modification.

Lyman Collins Cultural Arts manager, added that these additions will …”bring a 20th century building into the 21st century”

There will be 180 seats, some of which will be removable to allow for cabaret seating for some events. The theater will include two balconies, one on each side upstairs that will be accessed from the 2nd floor of the new adjacent addition building. The floor will have an appropriate modern slope, as the old theater did not conform to modern day standards.

The building addition includes dressing areas and a green room for stage productions on the first floor and a 2 story lobby opens up the space.

The building’s second floor includes a multi-purpose open space at the top of the stairs, and entry to the balcony as well as the main seating.

The third floor has some flex leasable space and the outdoor terrace café, which will be set back from the theater and the road.

The current drawings show the form of the sign rather than what materials will be used. The signage also tries to reflect the building’s 1940’s pedigree. The marquee will have a curve that will be reflected in the café upstairs and other curved lines throughout the building. Lyman noted that an artist team is working with the architects to create what he described as an art object for the signage. His hopes are that the sign will “enliven the street” and “give the building a rhythm” . The vertical element of the sign was added to create more presence and to help bring this section of downtown to life. Actual lighting materials have not been decided- neon, LED or otherwise.

Eric Simpson, Project manager next spoke about the “very ambitious” timetable for completing the streetscape in the East Chatham Street area of downtown. Work is to begin late Spring 2012 and continue through the end of the year. It will require this section of road to go down to one lane at times, but yes, Lazy Daze will go on as usual.

The theater block will be the first step towards making a visual improvement that creates more typical downtown building fronts. Facade improvements are planned for the Johnson Jewelers/ former India Bazaar building next door to the theater.

Another key idea is to bring the sidewalk to the street and eliminate the slope. Eric pointed out that the current sidewalk is almost a 9-degree slope, and a hazard. The slope will be eliminated to almost 2% and the sidewalk will allow for tables and chairs for diners. This sidewalk will be upgraded to a herringbone brick pattern and the curb will be granite. There will be 2 alleyways and 2 driveways to access the parking behind these buildings and the theater. Water and sewer lines will be improved (hence the road construction and lane reductions), and gutters will be upgraded on the Johnson’s Jewelers building.

“You shouldn’t have to guess where the Heart of Cary is”, but right now, its just not obvious. Ed refers to the intersection of Chatham and Academy, as Cary’s 100% corner. It is our single most important downtown intersection, and it needs to reflect that.

How will he accomplish that? Ideas are not finalized but the Town continues to work with both Kitchen and Bath Galleries and Fidelity Bank to enhance these opposing corners. First, the parking beside Kitchen & Bath on Academy will be angled (safer), paved with brick and reduced from 8 spots to 5. In the front, the parking will be reconfigured into “Hobby Plaza” in honor of the building’s original owners. The newsboy and clock will remain. Ed is currently exploring the idea of adding a second floor to this building. By adding height, the corners would become more significant.

Fidelity Bank has indicated they are willing to rework their plaza to be more inviting (fountain with seating, anyone?)- Nothing was presented for this corner yet. And the Town will also improve the sidewalks adjacent to the bank as part of the streetscape improvements.

On the street itself, the paving in this intersection needs improvement. Remember the old seal in the center of the street? Maybe this could be brought back? Or something like it to reflect the “Heart of Downtown”?

Ed Gawf’s mentioned that he is in talks with some developers to have private investment Downtown. He added that if in five years, the only changes Downtown were what the Town itself has built, he would consider his tenure a failure.

With so many ambitious projects already begun, I’d say he’s anything but!

Dig In to Gardening, Fresh Food and Community

Opinion: Let’s Be the “Technology Town of NC” Once Again
Scroll to top