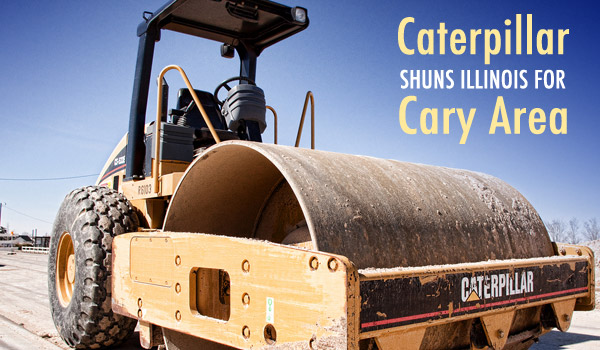 Cary, NC – The Chicago Tribune reported yesterday afternoon that Caterpillar is relocating a plant from Japan to the United States and has said no to Illinois elected officials, preferring to move the operation to the Cary area.

Business Climate is Better in NC

According to the Trib, Caterpillar cited logistical concerns and the business environment as ruling out Illinois, home of other Caterpillar operations:

Caterpillar Inc. has ruled Illinois out of plans to relocate a factory and 1,400 jobs from Japan, citing both logistical problems with building the plant in its home state and ongoing concerns about the business climate. – Chicago Tribune, 2/8/12

The company plans to announce the new location by April 1, start construction in mid-2013 and be at full capacity in four to five years.

In an email to Peoria County, Illinois elected officials, Caterpillar said “We have defined a very tight search area that is primarily being driven by logistics, port access, and proximity to our division headquarters in Cary, North Carolina.”

With increasing frequency, news is popping up of manufacturing jobs migrating back to the United States.

The existing Caterpillar plant, currently located in Sagami, Japan, makes excavators and small tractors. The company plans to move those operations to the U.S. and retool the Japanese plant to manufacture components for other Caterpillar equipment.

Thanks to CC News Spotters

Thanks to the CaryCitizen news spotters network for the tip. You know who you are.

Events: 30 Things to Do In Cary this Weekend
Scroll to top