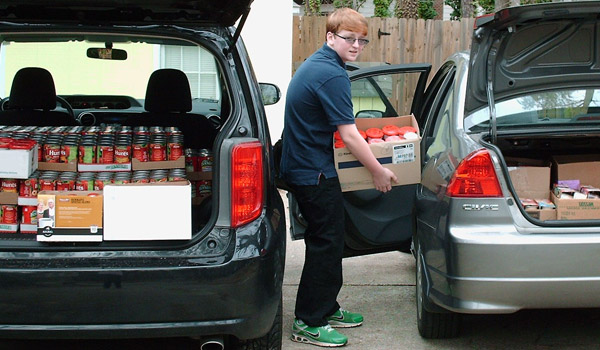 Story and photos courtesy of the Inhulsen Family.

Cary, NC – A seventh grader in Cary decided to see how much food he could collect for charity by clipping coupons. Over the course of three months, he spent less than $20 and collected over 1,400 pounds of food.

The Seventh Grader Who Could

Lori Towner, a CaryCitizen reader, sent us this note and pictures of her son Chris Inhulsen’s coupon quest to fight hunger:

Cary seventh grader Chris Inhulsen has been involved in food donation drives in the past but nothing like this one!

Last fall armed with coupons and food drive supplies from ConAgra’s “Schools Fighting Hunger Project,” he and his family approached a number of groups at his middle school but none wanted to take on this food drive. “We can’t just recycle all those coupons,” Chris told his mom. That’s when Chris and his dad started clipping coupons and his mom started scouring grocery store ads.

The family decided to see how much they could donate and how little money they could spend just by using coupons and following sales to make their donation purchases.

On February 4th, the family donated 1,474.5 pounds of food to the Western Wake Crisis Ministry  in Apex, NC. The total money spent by the family was $19.80 for this donation.

On the way home from dropping off the donation, Chris asked, “When are we starting to collect for the next food drive, Mom?”  The family plans on starting another food drive in the fall.

CaryCitizen emailed Lori Towner to double-check those facts and figures. How was it possible to collect 1,474 pounds of food for an expenditure of less than $20?

“Don’t you watch those coupon shows?,” Lori wrote back.  “It’s all about COUPONS!  Double coupons and sales where we were able to purchase the products and not pay a thing was what made it happen,” she said. “It would have been free but for those 20 boxes of popcorn at .99 each that we purchased.”

We love this kind of story, illustrating one of our community’s signature virtues – giving back. Congratulations to Chris and the entire Inhulsen family on a job well done!

If Chris cranks it up again in the autumn, we’ll be sure to let Cary citizens know how they can help. 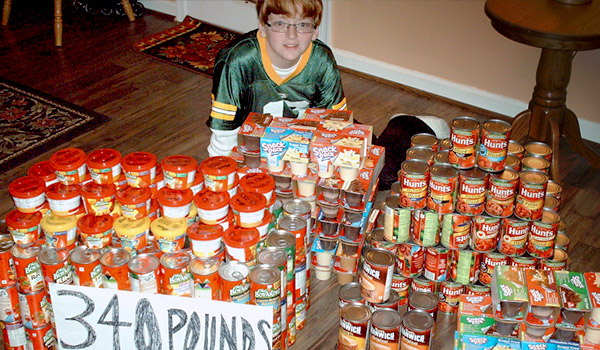 Events: 30 Things to Do In Cary this Weekend