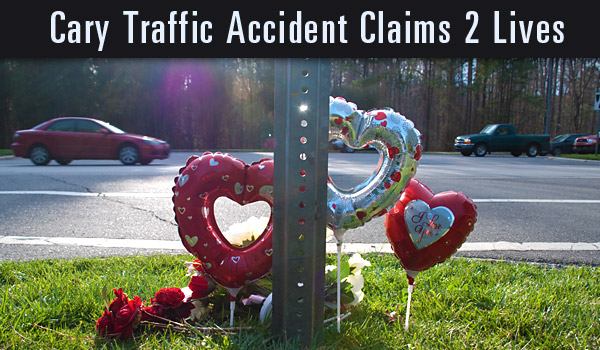 Cary, NC – A traffic accident near my home claimed two lives on Sunday morning. It was a sobering reminder about intersections we all know are dangerous.

The accident happened when 22-year-old Martikia Adams tried to make a left from Cary Parkway onto West Chatham St. It’s a dangerous corner, one where cars coming shooting around Cary Parkway at high speed from Old Apex Road.

Ms. Adams’ vehicle was stuck by an oncoming Dodge Avenger, according to reports. The driver of the Avenger sustained minor injuries. Ms. Adams and a passenger, 26-year-old Brian Cobb, were taken to Wake Med where they died.

Are Fatalities the Only Measure?

Fatalities seem to be the trigger that speeds construction of a traffic light at a dangerous spot. But we all know where these spots are located.

In my neighborhood, the intersection of Waldo Rood and MacArthur Drive is a fatality waiting to happen. It’s become a high-speed cut-through from Cary Parkway to Davis Drive.

I know traffic lights are expensive, but do we have to wait until someone dies to fix a dangerous situation?

Recently, Town Council member Lori Bush wrote about See Click Fix as a way tap into citizen knowledge of the community. Maybe we need something like See Click Live so we don’t have to wait for fatalities to know where traffic lights are desperately needed.